The Pacific Plate is assumed to be a single plate, but it is not. Hawaii, which rides higher after every major adjustment in the area, is rising, and this can only be the case if there is subduction of a plate somewhere, pushing the plate that Hawaii rides on up. The Society Island are on a chain that forms a line with the Hawaii Islands, and such a rise is not a coincidence. This is also a fault line, where a plate that is subducting under the Americas is rising commensurately along these island chains. There is a fault line running from Kamchatka to the Society Islands, and both will rise during the pole shift. There is likewise a fault line running from just west of the Hawaiian Island chain down to West Samoa.

West Samoa shares the Indo-Australian Plate edge with New Zealand, and will rise, and significantly so. New Zealand is expected to rise a total of 500 feet during the pole shift, which will essentially offset the 675 foot rise in sea level expected worldwide within two years after the pole shift. Thus, the islands of West Samoa can anticipate being, in the main, above the waves. There is likewise a portion of the Pacific Plate pushing under Japan and forcing the Philippine Plate to dive under Indonesia. This is tipping this part of the Pacific Plate so that the Marshall Islands and parts to the southwest of those islands are rising. These islands will benefit from the pole shift, though will not gain the altitude that West Samoa will. 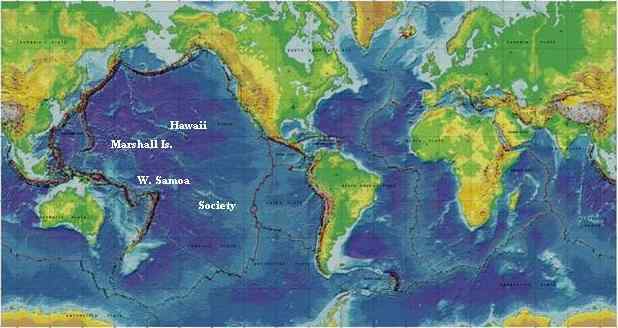