Where New Zealand will remain well above sea level after the shift and polar melts, it will be subject to the same forces during the shift as all other lands. Tidal waves will assault its coastlines, and where cliffs or mountain ranges lie along a coastline, tidal bore can occur, bringing rushing water to a height not expected. As New Zealand is a land of mountain ranges, stay well inland during the shift, returning to the coastlines only some days after the shift has occurred and the sloshing oceans and high tides have settled. Where New Zealand lies along a fault line, and thus has active volcanoes and geothermal area, due to the tipping up of the plate New Zealand lies on, pressure will be reduced during the hour of the shift, not increased, and the incidence of exploding volcanoes and the like lessened for this reason. In essence, there will be a new space under the tipped plate for lava to fill during the shift, which will reduce the press of lava upward.

Where New Zealand rests primarily on the plate shared with Australia, a fault line runs to the east and to some degree under the land, and this will separate. There is a reason that the north and south islands are all above water, despite the compression of the Pacific over he eons to plunge the plate to the east of New Zealand under these islands. Would the south island not plunge under the Indo-Australian plate, as it appears it might? The true fault line lies to further to the east and does not cross New Zealand, and this is why the islands as a whole have risen. What appears on the surface is an adjustment, land being dragged in a slip-slide manner, just as snow being plowed will tumble to the side in an irregular manner, not cleanly at the plowing edge.

When the Pacific shortens, the plate to the east of New Zealand will drop below the tipping plate shared with India, bolstering the tip up that New Zealand will experience. Tipping a plate that plunges, on one end, under a mountain range, will be in the main a continuation of what is already happening. However, for the several hundred feet that India will drop below its current sea level, there will be a commensurate raise at the far end of the plate shared with Australia and New Zealand, with the major benefit of this raise at the New Zealand end. New Zealand can expect, after all the sloshing about has stopped, to find itself 500 feet above the current sea level. With the melting poles expected to raise the sea level between 650 and 700 feet, this gain will disappear, but what the raised land does mean for New Zealand is that more of it's land will be above water after the poles melt, than elsewhere in the world.

The active volcanoes on New Zealand's north island will not increase their activity during the pole shift, due to the relief of pressure suddenly available under their cones during the hour of the pole shift. In fact, this activity is likely to lessen. Since the populace is used to giving these volcanoes a wide berth and proper respect, this will if anything be a pleasant surprise. Indeed, the direction of winds will shift after the pole shift, but as New Zealand will be so very close to the Equator, any ash from north island volcanoes will blow back to what is now north, thus out to sea. The future New Zealand will also not find itself a desert, as winds laden with moisture from the ocean will be plentiful and will unload their moisture when rising up along mountain ranges. 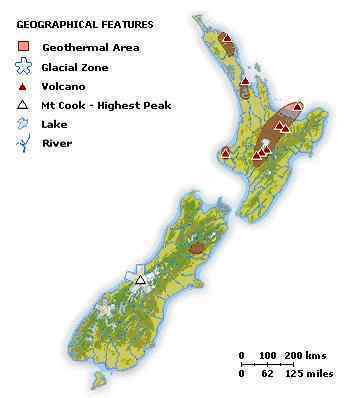 There are dozens of fault lines under New Zealand as yet undiscovered by modern man, as was recently explosed during a September 4, 2010 quake at Canterbury. As we have stated what is considered the border between the Pacific and Indo-Australian plates, where the south island lies on the Pacific Plate and the north island the Indo-Australian Plate, it not the true border which lies further east. All of New Zealand, thus, rides with Australia during the pole shift. The presumed border is merely a surface fault line, and as the quakes pick up, more will emerge. Consider this, thus, to be an area that will fracture and crumble a lot. We decline to detail every minor fault line that may create landslides or crevasses, as this will also be happening in many other places around the globe and we must prioritize our and Nancy's time for more important issues. 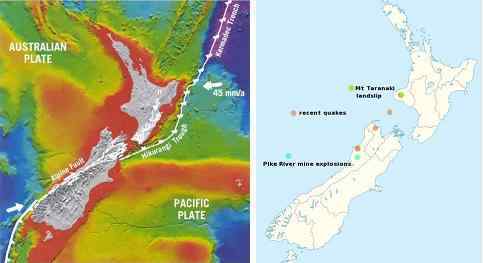 New Zealand will lie right on the new Equator, and thus it's winds will come steadily from the new east, as the globe rotates. Yes, the melting of the ice in Antarctica will keep you cool for awhile before the tropical Sun is dominant. This will not be cooler than you are accustomed, so will merely provide you with more time to adjust to a tropical climate.