There are a couple CC recently that look genuine. Most this year as so pathetic, clearly hoaxes, and I had the impression the aliens had left the field. The first is in Holland, laid in 3 different places on May 21, 2013. http://www.robbertvandenbroeke.nl/graancirkelarchief/2013 The second is in France, laid on July 4, 2013 at Imling near Sarrebourg. http://www.cropcircleconnector.com/2013/Imling/Imling2013a.html

Both these crop circle designs are genuine and both depict the Earth wobble. In France, the design shows the Sun’s magnetic field in the center. This is mirrored, in the vicinity of Earth, as Planet X comes closer, becoming more dominant as it is closer to the Earth. When Planet X is not present, only the Sun’s magnetic field is dominant. For Holland, the 3 separate designs depict stages in the wobble. The first shows both the Earth and Planet X in their relative sizes. The second show the wobble developing. The third shows the contortions of the Earth wobble. One can almost feel the Figure 8 sway as the eye travels from left to right.

For several years now in the Penokee Hills of northern Wisconsin there has been controversy over a proposed taconite mining operation.  The issue continues to heat up. I cannot help but wonder if there is more here than what meets the eye because of the pressure to get this mine going. Why the rush, especially in light of the distressed global economy? Is this area actually to be an elite hidey hole?  Can the Zetas elaborate on what is going on here? http://beforeitsnews.com/alternative/2013/07/us-soldiers-deployed-in-penokee-hills-of-wisconsin-to-guard-future-worlds-largest-taconite-mine-2704586.html  [and from another] http://www.jsonline.com/news/statepolitics/mining-company-hires-guards-armed-with-assault-rifles-wearing-camouflage-b9951188z1-214812771.html  Citing an incident of threats and vandalism a month ago, a mining company in northern Wisconsin is standing by its decision to bring in an out-of-state security company that outfits its guards with camouflage fatigues and assault rifles and calls itself "Bulletproof." Gogebic has an option on the mineral rights of the land in question, which is regulated under the state's managed forest law. Iron County Sheriff Tony Furyk estimated damage in the June 11 incident at $2,000 after protesters with covered faces slashed tires, damaged equipment, destroyed a worker's camera and took away her cellphone.

On the face of it this confrontation is just another confrontation between environmentalists and corporate interests. Activists have taken to living high in trees for months on end to prevent ancient forests from being reduced to lumber, for instance. What makes this confrontation different are the armed guards with semi-automatic weapons, in an area that currently allows the public to hunt and fish and camp! The current Wisconsin governor is an extreme right leaning Republican, and the legislation likewise in the hands of corporate friendly Republicans, giving the corporation, Gogebic, moral encouragement. Is the price of Iron all that high, the resource all that scares, to justify this operation?

When these types of battles ensue it is less over the value of the corporate product, and more the foot stomping of corporate and political bullies determined to have their way. How dare the public refuse to step aside when corporate looting of the landscape is in process! The company could go elsewhere, to a location where such a clash would not occur, but the bully personality will push until they begin to feel pain. For a corporation, pain is profits. In this situation that may be a civil suit when the inevitable happens – hunters or campers rightfully on the land having their lawful civil rights egregiously infringed. Wisconsin state lands belong to the people, not to Governor Walker and his cronies.

I am surprised no one asked this yet, but do the Zetas want to go on the record regarding the East Coast Tsunami on June 13? Was this the North Atlantic Rift tearing? The official explanation seems absurd. [and from another] http://m.usatoday.com/article/news/2458447  It appears that a rare type of tsunami called a "meteotsunami" hit the New Jersey coast June 13, with Barnegat Light bearing the brunt of the wave. Strong weather systems can cause jumps in air pressure, spawning waves that act just like tsunamis. There may have been some other source involved, such as a subsea slump in the continental shelf off New Jersey. In Boothbay Harbor, water levels in the harbor dropped rapidly, then surged to flood docks and buildings along the waterfront. [and from another] http://www.nbcphiladelphia.com/news/local/Tsunami-Strikes-the-Jersey-Shore-212814951.html  A large wave, approximately 6-feet from peak to trough, coming across the inlet. The wave was so powerful that it swept two people off a rock jetty and into the water on Long Beach Island. The tsunami was observed at over 30 tide gages and one DART buoy throughout the Northwestern Atlantic Ocean.

Clearly the Atlantic is ripping open. If the Pacific compresses, as can hardly be denied when the Pacific Rim is so active, then the Atlantic must widen. Such ripping is silent on seismographs, but on land produces crevasses and when under water, tsunami can result. The clue that this is not due to atmospheric changes is the buoy reading in the Atlantic. The tsunami also went against the outbound tide, such was the push. Long Beach Island, the point of greatest impact, was influenced by the continental shelf rift, an old river bed that cuts deep into the shelf. Note that the entry into the rift lies directly East of Long Beach Island, in harm’s way. This episode will be repeated as plate movement accelerates.

Several alternative media sites in The Netherlands reported this week that Barack Obama, Bill Clinton and George W. Bush were on the African continent at the same time. It has never happened before that two former presidents and the current president were in Africa at the same time. They gave all different sort of explanations but none mentioned Planet X. My gut feeling tells me it must be Planet X related, as the African content is a safe haven during the Pole Shift so the leaders of the USA are trying to make friends. Is this what is happening or is there something else going on? Would the Zeta's care to comment? [and from another] Investing in Women: Strengthening Africa June 28, 2013 http://www.bushcenter.org/events/investing-women-strengthening-africa On July 2-3, 2013, the Bush Institute will host the African First Ladies Summit, “Investing in Women: Strengthening Africa,” in Dar es Salaam, Tanzania. The Summit will highlight the critical role First Ladies play as advocates for women and girls, and provide examples and models of programs that are working to better the lives of women and girls across the continent. First Lady Michelle Obama and Mrs. Laura Bush will hold a discussion moderated by Cokie Roberts. [and from another] Both Obama and Bush Head to Africa June 23, 2013 http://www.usatoday.com/story/theoval/2013/06/23/obama-bush-africa-michelle-laura/2449991/ President Obama isn't the only prominent American traveling to Africa in the days ahead. Former president George W. Bush, who made the fight against AIDS in Africa a major part of his administration, will soon be heading to Zambia and Tanzania. [and from another] Former US President Bill Clinton is Expected in Senegal Hours Before the Arrival of the Incumbent President Barack Obama June 18, 2013 http://goingglobaleastmeetswest.blogspot.com/2013/06/africa-former-us-president-bill-clinton.html Even though the exact reason for Mr Clinton’s visit was not made clear, analysts said he was expected to meet political and civil society leaders “in a bid to strengthen the democratic dividends” in Senegal. 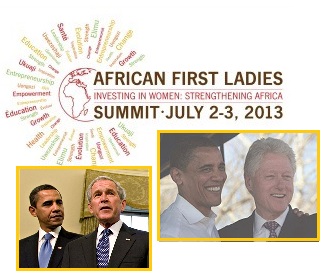 We stated that Obama intended to offer assistance to African countries during his early July, 2013 trip there, so that they could better absorb migrants from Europe and India during the flooding expected both before and after the Pole Shift. It has been a tradition to use former US presidents after disasters to act as envoys for disaster relief. Here this type of partnership is being employed prior to the disasters. They will stand in Obama’s stead, acting as his envoys, to establish how US aid can be utilized to help Africa develop its resources so as to support migrants. Clean and readily available water is key.