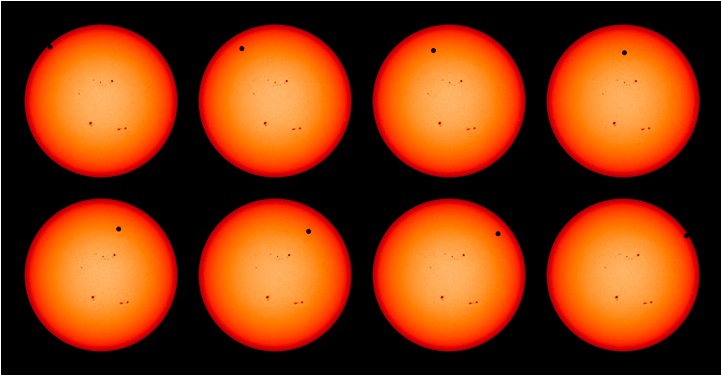 The vast majority of those watching the Venus transit thought all was normal.  But for astronomers and amateur astronomers, and those who were watching closely for signs that Nibiru was in the vicinity, the aberrant path taken by Venus was all too obvious. Astronomers already know the truth, as in their professions they have access to observatory equipment. They have been silenced, and told to belittle any amateur who questions the status quo. Thus there are a huge number of amateur astronomers who have noticed the Earth wobble and imaged the region around the Sun, seeing evidence of Planet X, who are hesitant to speak out because they do not have proof.

Now they have proof. The Earth wobble, with the Sun appearing in the wrong place, could be ascribed to bending light or an errant compass, and objects appearing in photos and videos can be ascribed to lens flares or smudges on the lens. But there can be no blaming amateur observers when several observatory webcams, many of them sponsored by NASA itself, all show the identical aberration. clearly the path went in the wrong direction. Venus was of course pushed into position to look as expected, at the start. This was to calm the establishment who would otherwise have arranged for technical problems all around.

But as the transit approached the halfway mark, alarm mounted, and the observatory cams were told to confuse the issue. Some cams went offline, showing cheering crowds instead of the drama. Some observatory cams focused on Venus itself so closely that the path it was taking could not be determined. But such maneuvers could not be done on all cams without raising many questions. The SOHO view of the Sun, for instance, which did include the black dot of Venus, could not go offline or focus only on Venus. But it was clear that the establishment was attempting to distract the public from what was being shown – the aberrant path. What will be the outcome?

Amateurs will become emboldened, and not be dismissed. They will talk to others, and the rumors of a planetary body in the inner solar system will spread! The transits of Venus should be absolutely predictable down to the last inch and moment. Yet the official astronomical community has fallen silent! What this points to is a cover-up over the presence of the Planet X complex. If the cover-up plans to zoom an imaginary planet in from the Kuiper Belt to explain what the public is seeing in Red Filter photos, or to claim that the Sun has developed quad poles to explain the disturbed Earth magnetosphere and daily wobble, then they are too late.

The truth is out there! Venus is not a magnetic planet. It did not take this path because of some gravity influence beyond Neptune or a quad pole on the Sun. It took this path because something huge, a gravitational giant, was to the right of the Sun and in its orbit. That something is Planet X, announcing itself in no uncertain terms. This is the proof that amateur astronomers have been waiting for, the proof that explains all the signs that have been present since 2003. The pieces of the puzzle are falling into place. Fueled by anger over years of being belittled and dismissed, amateur astronomers will be a force that refuses to be silenced!

Published on June 6, 2012 by NASA Explorer http://www.youtube.com/watch?v=4Z9rM8ChTjY Launched on Feb. 11, 2010, the Solar Dynamics Observatory, or SDO, is the most advanced spacecraft ever designed to study the sun. On June 5 2012, SDO collected images of the rarest predictable solar event--the transit of Venus across the face of the sun.   The videos and images displayed here are constructed from several wavelengths of extreme ultraviolet light and a portion of the visible spectrum.  This video is public domain and can be downloaded at: http://svs.gsfc.nasa.gov/vis/a010000/a010900/a010996/index.html

Venus is caught in the cup, as we so long ago explained. This occurred because as Planet X passes the Sun it does so within the region of the orbits of Earth, Venus, and the Dark Twin. Planet X first crossed Earth’s orbit in December, 2003 when the Earth encountered Planet X, halted her orbit due to this massive presence, and has subsequently been pushed back in her orbit by the retrograde motion of Planet X to what would normally be Earth’s August position.  As Venus and the Dark Twin came round in their orbits, they encountered this same obstacle and also halted. Venus has been moved back and forth in the cup, in order to simulate its normal orbit for Earthlings, in accordance with the Element of Doubt rule imposed to reduce panic in the trigger-happy establishment.

That said, what occurred during the June 5-6, 2012 transit of Venus? Venus was pushed into position at the start of the transit, as we mentioned, so as not to panic the establishment. By the time they realized the path was not going according to the published path, it was too late. Their anticipated path was already in the news, already in the hands of amateur astronomers, and cameras were recording all over the globe. To recover, the establishment tried to zoom on Venus, so the path could not be determined and they will try to confuse the public by tilting the Sun in images so the path slants. But this will not succeed, as sunspots move with the Sun’s Ecliptic, rotate with the Sun, so comparisons can be made. NASA cannot hide what happened.

What of the Venus wobble, noted by many, that seemed to take a waved path across the face of the Sun. This is not apparent in a moment-by-moment view, but a rapid transit is obvious. The establishment is quickly trying to explain this wobble as motion in Sun-centric satellites, which are claimed to move up and down and thus, being closer to Venus than the Sun, this makes it appear that Venus is moving. But the distance Venus would have to move to create this wobble several times within the 6 hour transit is not feasible, nor does this occur. Did Venus bobble up and down during the transit? It is struggling with mixed messages, one from the Sun to stay in its established orbit, another from Planet X to stay above a conflict with the gravity press from this monster just to the right. The dither, or wave form, was real.

http://en.wikipedia.org/wiki/Solar_Dynamics_Observatory
After launch, the spacecraft was placed into an orbit around the Earth with an initial perigee of about 2,500 kilometres (1,600 mi). SDO then underwent a series of orbit-raising maneuvers which adjusted its orbit until the spacecraft reached its planned circular, geosynchronous orbit at an altitude of 36,000 kilometres (22,000 mi), at 102° W longitude, inclined at 28.5°.

http://www.earthobservatory.nasa.gov/Features/OrbitsCatalog/page2.php
A satellite in a circular geosynchronous orbit directly over the equator (eccentricity and inclination at zero) will have a geostationary orbit that does not move at all relative to the ground. It is always directly over the same place on the Earth’s surface.