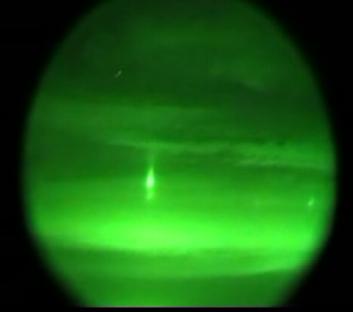 My Soldiers and I witnessed what I think is some sort of natural phenomenon in the sky over Iraq. http://www.godlikeproductions.com/forum1/message483651/pg1

Humans do understand that light can be generated from chemical processes without being accompanied by an explosion or heat. Light sticks are an example of this simple process being commercialized. There are different chemicals in the atmosphere of Earth at this time than have been in the memory of man. It has been only during the past couple years, since the arrival of Planet X into the inner solar system, that Moon halos have been noted, or odd neon clouds. The wafting tail of Planet X arrived in 2003, which was noted as a time when the red dust first arrived. We have discussed the chemical qualities of the charged tail of Planet X, which includes not only debris such as gravel and boulders but also petrochemical components gathered from the Asteroid Belt when it was pelted to pieces in the past. We have described how the moon swirls in the tail of Planet X form tubes that funnel light toward one end, thus appearing as a light orb to those who see the moon swirl while peering down one end of the tube. Is there a relationship of these light towers and tornado shapes appearing on Earth now to the moon swirls in the tail of Planet X? Indeed there is. Light is bent within the moon swirl by chemicals swirling there there to flow down the tube and emerge at an end.

Light bends, a fact known to man as rainbows spread across the light spectrum bent only by the water in the clouds. Light is bent by water, a fact known to any child who wonders why his feet are displaced when he stands in a pool of water. Light bends when going through a prism, solid glass. An oil smear on the window will also create a rainbow in the sunlight. Light also follows the flow of electrons, which anyone watching a lightning display understands. These light particles were not generated from thin air by the flow of electrons. They were attracted to the charge and bent to follow the flow, and thus emerged into view in the vicinity of the lightning path. The tail of Planet X is charged due to the iron oxide dust particles disbursed throughout the tail. This charge has nowhere to go, as the tail is not grounded. It is essentially static electricity. But when the red dust and petrochemical components in the tail waft into Earth's atmosphere where there is free oxygen and nitrogen, chemical reactions not occurring out in space are possible. 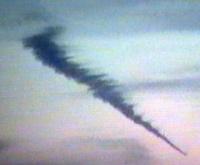 Man is used to thinking of chemical reactions involving petrochemical components and oxygen as an explosion, happening suddenly - boom! But where disbursed and present in barely perceptible quantities, it is more akin to a slow swoosh, creating a spiral of heat that starts a tornado effect in the atmosphere. Where a slow explosion has passed, the smoke created can linger, looking like a dark tornado floating in the air. Where the slow explosion occurs at night, the light can seem dramatic for the few minutes it lasts. This is a chemical reaction in the atmosphere, as we stated earlier in response to the initial report from Iraq. More such light towers can be anticipated, but beyond this, more effects from the tail of Planet X can be anticipated as the tail components increase in density in the atmosphere of Earth. What these effects will be we will not say, as we prefer to have the establishment caught off guard so that the cover-up stumbles and the public learns the truth. The establishment knows what is coming, but is keeping the truth from the public, who like the elite have a right to know.

I thought first it was a tornado, but then it started to glow and the stripe become brighter. 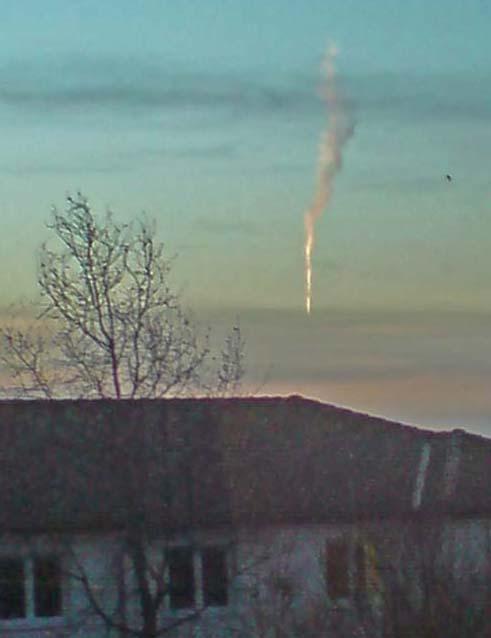