I smell another Clinton scandal brewing in this "data breach" contretemps in which the Sanders' campaign was effectively sealed off from important Democratic voter data by the DNC, supposedly due to Sanders' data director peeking at data that was exposed by an "incompetent" vendor - NGP VAN.  Seems like NGP VAN perhaps intentionally dropped their firewall in order to bait someone from the Sanders' campaign, effectively entrapping them and tarnishing Bernie's good-guy image, or at least lower him to the snake-like image Hillary has. The DNC, headed by Debbie Wasserman-Schultz (who is a pro-Israel politician from Florida and was Hillary's spokeswoman in the 2008 campaign), seems determined to "stack the deck" for Hillary, no matter what it takes. What's the real story behind the headlines here?  Just a simple campaign brou-haha or an outright attack by Hillary's minions against the only serious candidate that is threatening her coronation?  [and from another] http://www.cnn.com/2015/12/18/politics/bernie-sanders-campaign-dnc-suspension/  The Sanders campaign accessed turnout projections for Iowa caucuses and the New Hampshire primary, a key piece of strategy the Clinton campaign has been working on with modeling and analytics. [and from another] http://www.politico.com/story/2015/12/sanders-campaign-threatens-to-sue-dnc-216942  Tension rapidly escalated throughout the day as the Democratic National Committee cut off Sanders' access to his own voter files, effectively crippling his field operation, and the senator retaliated by suing the party and accusing its leaders of plotting to hand the presidential nomination to the Democratic frontrunner. After discussions with the DNC and a federal judge, the Sanders campaign said that the DNC had "capitulated" and agreed to restore access to the data. However, a person familiar with the situation told POLITICO, the Sanders camp would not be dropping its lawsuit against the DNC because of the resolution. [and from another] http://www.foxnews.com/politics/2015/12/19/sanders-campaign-regains-access-to-dnc-voter-database.html?intcmp=hplnws  The Sanders camp filed a lawsuit in U.S. District Court in Washington seeking an immediate restoration of access to the database. Without it, the lawsuit said, the campaign would lose approximately $600,000 in donations a day. [and from another] http://www.campaignsandelections.com/campaign-insider/2610/sanders-breach-puts-data-vendor-battle-front-and-center  The Sanders campaign said its earlier complaints about NGP VAN’s data security fell on deaf ears. his is not the first time that the vendor hired by the DNC to run the voter file program, NGP VAN, has allowed serious failures to occur. On more than one occasion, they have dropped the firewall between the data of competing Democratic campaigns. That is dangerous incompetence. It was our campaign months ago that alerted the DNC to the fact that campaign data was being made available to other campaigns. [and from another]  http://abcnews.go.com/Politics/dnc-data-breach-happened-means-bernie-sanders-campaign/story?id=35841222  Sanders campaign officials defended themselves during a news conference, saying they are running a "clean" campaign and that they in fact "alerted" the DNC two months ago that campaign data was available to others. The campaign emphasized that this is not the first time the technology company "allows" serious "failures" to happen, and that Sanders' campaign no longer has any of the Clinton campaign’s data.e fact that campaign data was being made available to other campaigns. [and from another] http://www.politico.com/story/2015/12/democrats-data-breach-vulnerability-216955 While Sanders’ campaign accepted responsibility for the breach, it also laid some blame at NGP VAN’s doorstep. None of this would have happened but for “the incompetence of the vendor,” argued campaign manager Jeff Weaver, who also alleged that months ago “some of our data was lost to one of the other campaigns.” 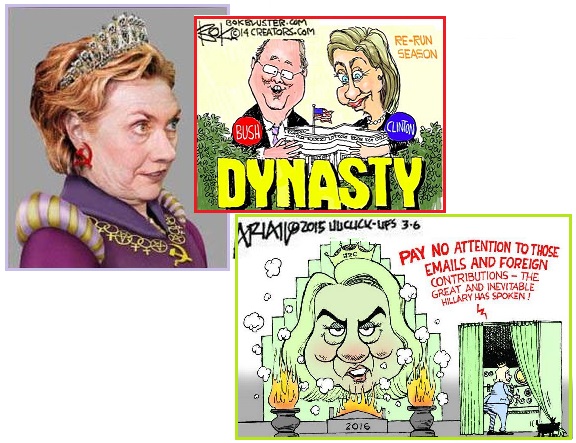 How insecure is the Hillary Clinton campaign? Following what was obviously bad news from Obama during their private lunch on December 7, Hillary was more determined than even to maintain her phenomenal lead over Sanders. Following Hillary’s bad week, she was seen leaning on Warren Buffet while Sanders collected a union endorsement. Not the best visuals. Hillary is nervous. In her view, her only hope of avoiding an indictment, or getting Obama to quickly pardon her, is to posture as inevitable, so that Obama would fear the White House falling into Republican hands. Back Hillary or else.

The trend has been for the Hillary campaign to lose its lead when a state gets familiar with Sanders, a relatively unknown Senator. Hillary has a familiar name, having run in 2008 and having been Secretary of State from 2009-2013. For Sanders, the reaction is “Bernie who?” Key endorsements, from Obama and Elizabeth Warren, have not yet been granted. Sanders has the ability to enthuse small donors, much as Obama did in 2008, while Hillary relies on the wealthy, who are now nervous over a possible indictment of Hillary. Enter the NGP VAN breach.

This breach was certainly not the first, as Sanders points out on his website. Sanders informed the DNC about firewall problems
http://www.campaignsandelections.com/campaign-insider/2610/sanders-breach-puts-data-vendor-battle-front-and-center
in the past, and was ignored, as the DNC is in the tank for Hillary and did not care if Sanders’ data was being breached. How can Sanders be the sneak when his campaign reported the problem in the past? How can the DNC justify cutting Sanders off from his own donor list? Where was the indignation and investigation in the past, when Sanders complained to the DNC about leaks in the firewall?

Rather than quietly fixing the firewall, Wasserman-Schultz and Hillary exploded the matter into the press, where Sanders will gain and Hillary and the DNC will lose. What was their thinking? Sanders was polite on a past debate, saying he was tired of the “damn emails” being discussed, and they thus assumed he could be intimidated. The day before the next Democratic debate on December 19, they hoped to humiliate and hobble him. Instead the affair demonstrated to the world that the DNC is absolutely in the tank for Hillary, and Sanders will get unlimited press time! Oops.

After repeated Council of Worlds slaps against Elon Musk’s Space X Falcon rocket launch and/or landings, during which the Zetas emphasized that a manned mission to Mars will not occur, they seem to have had a success. What is different about this launch and landing is that the ocean platform landing was not attempted. Instead, the stage one rocket was brought back to land in Florida. Was this the issue? Why the objection to the ocean platform landing? [and from another] http://space.stackexchange.com/questions/7753/why-did-spacex-attempt-to-land-the-booster-on-a-barge-instead-of-somewhere-on-la  I understand the benefits of reusability for the rocket booster. But I don't understand why they're landing it on a barge. I've read tons of articles about this but not one has even hinted at an answer. Why is landing on a barge preferable over a launchpad or any other large flat surface that isn't moving with the waves? … Musk says the payload hit for RTLS (Return To Launch Site) is 30% vs a 15% payload hit for landing on a downrange ocean platform. … I see nobody seems to have mentioned the simplest reason why they're not landing on land: there isn't any. They launch east from Florida, and there aren't any islands in the Atlantic out there. [and from another] http://www.nbcnews.com/tech/innovation/spacex-makes-history-successfully-launches-lands-falcon-9-rocket-n483921  The launch and landing in Cape Canaveral, Florida, were the first from the private U.S. spaceflight company since its rocket exploded on liftoff in June. SpaceX had not previously attempted to land a rocket on land, and it marked the firm's first successful attempt to recover a rocket from an orbital flight. Previous attempts, all unsuccessful, were attempted on floating landing pads. The 15-story first stage of rocket — used to propel the payload to 62 miles or so until the second stage takes over — successfully landed on Earth again at a prepared landing zone. 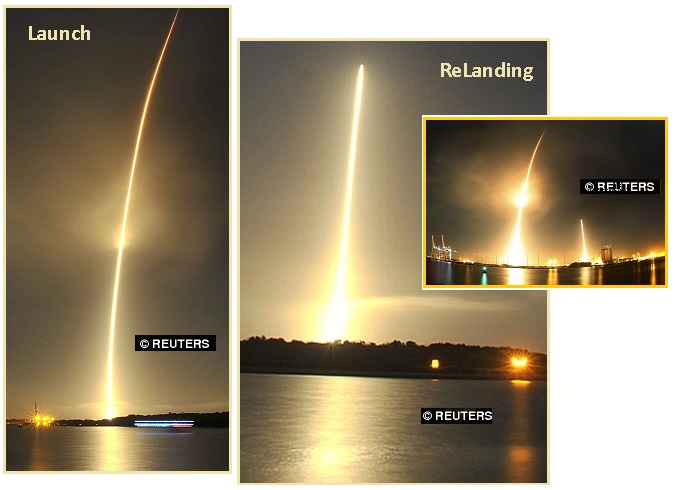 After repeated failures, which we described as warnings from the Council of Worlds, the Space X Falcon has successfully made a launch while relanding the booster rockets to Earth. What is the message here, amid this celebration? The trail of tears for Elon Musk included the Falcon exploding on launch last June 28, and the landing platform disaster on April 15. We explained that the Council was sending a message that the elite would not escape to Mars. Why then was the Falcon successfully launched with the booster rockets landed back in Cape Canaveral? Noticeably lacking this time was the landing on an ocean platform.

Why is this key? Landing on an ocean platform did not make sense from a cost benefit analysis. Espoused for saving a mere 15% in fuel costs, it carried the overhead of the platform itself. Musk stated the reason for an ocean landing was to avoid a crash on land, near populated areas, during initial practice runs. But without a successful landing, this December 21 landing was done directly onto land. The real goal, an ocean platform landing AND launch, was dropped, so that simply launching satellites and resupplying the ISS would be involved for the present and in the future.

Despite much crowing in the media about manned missions to Mars, all involved know this will never be accomplished. It is bravado and face saving. The missions to and from Mars would require operating during the Last Weeks and in the Aftertime, when Cape Canaveral in Florida will be awash and under water. Houston likewise will be quickly under water. The elite at NASA and hovering around Elon Musk are well aware of the ZetaTalk predictions and accuracy, and see how quickly Nibiru is approaching the Earth. They know that time is tight, the timeline compressing, and if a replacement for a land launch is not available, all is lost!