It appears by this article that the elite are still hell bent on going into space to escape and come back'?  Could the Zeta's respond to this  video about the  precariat,  and the Bilderberg.  This is indeed the same as the Zeta's saying beware of those who offer work, as they are slave camps. [and from another] http://www.infowars.com/john-galt-shrugs-uses-welfare-to-control-precariat/ What do socialist utopians have in common with Bilderberg globalists, banksters and “free-market” think tanks? [and from another] http://www.infowars.com/exclusive-bilderberg-planning-to-trigger-financial-collapse/ For the second time in the space of ten years, the powerful Bilderberg group is plotting to trigger a financial collapse, with elitists already positioning themselves to profit from the next economic meltdown. As we reported back in 2006 during the Bilderberg Group’s meeting in Ottawa, Canada, leaked information from an American delegate revealed that insiders were preparing for the housing bubble to burst and a global market crash. Over the course of the next two years, that exact scenario played out, culminating in the collapse of Lehman Brothers and a worldwide recession. [and from another] https://www.rt.com/news/346253-bilderberg-conference-2016-germany/ Bilderberg was “designed to foster dialogue between Europe and North America” and is considered to be one of the most concentrated gatherings of the world elite. From “war criminals“ like former US Secretary of State Henry Kissinger to war profiteers like Honeywell CEO (and White House insider) Dave Cote, veterans of the conference include austerity hawks like former European Commission president Jose Manuel Barroso and IMF head Christine Lagarde. It’s also a chance for the former heads of the CIA and MI5 to check in with oil giants Shell and BP. Often cited as “evidence” is Bill Clinton’s attendance at the 1991 conference as a largely unknown governor from the small state of Arkansas a year before he became president of the United States and Tony Blair’s rise from a mere shadow minister attending the 1993 conference to Prime Minister four years later. Hillary Clinton’s chief adviser Jim Messina stopped by last year, just in time for a gig as head of the Democratic Party super PAC Priorities USA. More than a dozen attendees this year have close financial ties to both Clintons, but there are a few Republicans in the mix as well. [and from another] http://www.zerohedge.com/news/2016-06-10/does-bilderberg-really-run-world-one-chart-help-you-decide With the Bilderberg 2016 meeting now humming along at the Taschenbergpalais hotel in Dresden, deep behind closed doors and protected by heavily-armed guards, many have wondered: just how hyperbolic are allegations that the Bilderbergs run the world. To help readers decide, here is a chart laying out the linkages and various connections - financial, political, statutory and otherwise - between the handful of people who comprise the Bilderberg core and the rest of the world. [and from another] http://www.forbes.com/sites/antoinegara/2016/06/09/george-soros-bear-china-brexit-eu-trump/#56ede6e96129 Soros believes that a push in the United Kingdom to exit the European Union could destabilize the Eurozone, especially as a migration crisis engenders rising nationalism.  Soros has made a bet against the U.S. stock market using a derivatives position. The last time Soros was actively trading was 2007, when he made a reported $1 billion betting against the overvalued market.

In the year that has passed since Bilderberg 2015 the elite have been grieving over the slow rolling announcement on Nibiru’s existence - the multi-prong’d press releases ongoing since January, 2016. Any hope of preventing this has vanished, though they are still loading the media with disinformation as to the causes of the Earth wobble (an ice-free N Pole) and sinking land along the Southeast coast of the US (mantle erosion). They hope to delay the connection between Nibiru’s approach and the obvious appearance of a wobble and weather extremes and the earthquake increase since 2003. They hope the public will be confused.

Meanwhile, the western banking systems are rapidly collapsing. Wall Street is pumped high, as it was going into the 2008 housing bubble collapse, and savvy Hedge Fund owner Soros is again betting on another collapse. General Dunford, at the helm in the US, has over this past year assumed full control of the US Federal Reserve, confiscating huge amounts of illicit funds kept there via double bookkeeping, and the Panama Papers has resulted in confiscation of funds being laundered in Europe and the Caribbean and South America.

Where the 1% are not yet collecting food stamps and standing in soup kitchen lines, many frankly fear this will in essence be the end result.  Poverty is relative, and for the elite to find themselves in the middle class is a devastation. Where the elite attending Bilderberg are primarily allied with the West, the strength of the West seems to be shaky, from NATO’s stand against Russia to Erdogan’s ambitions to the brutality of ISIS while trying to take over the Middle East and even Europe. They fear the Euro will collapse, European alliances be dismissed, and a need to bow and scrape to China and Russia in the near future.

Where the Bilderberg consider themselves to be in control of the world, the Bilderberg 2016 conference has this group frantic as the reins of power keep slipping through their fingers. A Bush or Clinton was supposed to ascend to the White House, so that war profiteering and Wall Street fraud could continue, but now Bush is firmly out of the picture and Clinton seems likely to be challenged by Dunford on her many self-serving crimes as Secretary of State. Public corruption and failing to protect national secrets will hardly get her elected by the people. How to make a deal with Trump, the deal master, is thus much under discussion.

Could the Zetas say something about this latest shooting, it look like way to start marital law in the states? [and from another] https://www.rt.com/usa/346339-gay-club-orlando-shooting/ "Deadliest mass shooting in US history: 50 dead, 53 injured in Orlando gay club massacre" [and from another] https://www.rt.com/news/346390-isis-claims-orlando-shooting/  [and from another] https://www.rt.com/usa/346325-orlando-shooting-pulse-nightclub/ [and from another] http://www.dailymail.co.uk/news/article-3637414/Everyone-running-Gunman-bursts-gay-nightclub-Florida-shoots-20-people-taking-hostages.html Shooter Omar Mateen, 29, from Port St. Lucie in Florida, opened fire at Pulse night club in the early hours of Sunday, killing at least 50 people and injuring 53 others. This is the first time ISIS has claimed responsibility for an attack on US soil. Shortly before the attack, Mateen, who was born in New York to Afghan parents, called 911 and pledged allegiance to ISIS leader Abu Bakr al-Baghdadi. US citizen Mateen, who was shot dead by officers, entered the nightclub wielding an AR-15 assault rifle and a handgun. He also had an unidentified 'device', said Orlando Police Chief John Mina. Mateen had purchased at least two firearms legally within the last week or so, according to FBI agent Ronald Hopper. [and from another] http://counterjihad.com/isis-infiltrated-homeland-security-orlando-terrorist-worked-major-dhs-contractor/
Orlando nightclub terrorist worked for major DHS contractor that secures “90 percent of U.S. nuclear facilities.” Omar Mir Seddique Mateen, an Afghan-American who held two firearms licenses and a security officer license, was employed by the security firm G4S Secure Solutions USA Inc. since Sept. 10, 2007. The Jupiter, Fla.-based company merged with the Wackenhut Corp. after 9/11 and assumed federal contracts. 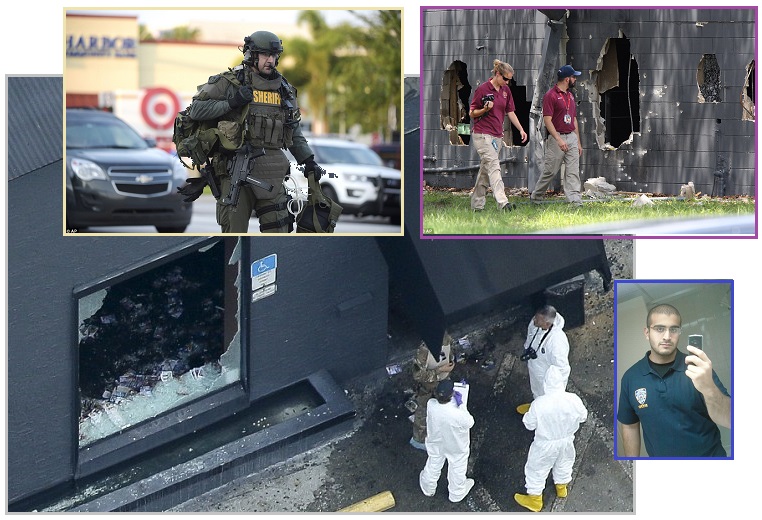 What changes will occur in Homeland Security and FBI procedures as a result of this mass shooting in Orlando, which clearly bears the marks of being ISIS inspired? The warning signs were ignored. Mateen had a license for assault rifles as he had formerly worked for a Homeland Security contractor and currently worked as a security guard. This, despite being investigated twice by the FBI for terrorist sympathies. The current gun laws would not have screened him out, as he was neither mentally unstable nor a former felon, though was filled with intense hatred.

The necessary changes to laws and procedures within the US are in direct conflict with Obama’s attitudes toward the current terrorist threats, wherein he refuses to even use the phrase “radical Islam”. Yet the recent US terrorist inspired attacks in Boston and San Bernardino had links to radical groups in Kyrgyzstan and Saudi Arabia, and the FBI and immigration were aware of this. But is the US to export every such individual? This link appeared to be missing in the Orlando shooting, though Mateen’s attitudes and intense hatred - his prevailing personality feature - was certainly a flag and got him fired from his Homeland Security contractor job.

We have predicted that martial law will be declared in almost every country well prior to the Pole Shift, due to the Earth changes forcing homelessness and migration, crop failure forcing starvation, and the breakdown of social services. But terrorism caused by radical Islamic precepts is unlikely to be the trigger because this can be controlled by selective enforcement. The gun laws will be amended and tightened. Trump’s popularity will increase due to his attitude about limiting immigration. But martial law will not be called in the US due to this massacre.

FEMA is preparing for a major event. Are these rumors true? Is this related to the New Madrid? [and from another] Is Something BIG Coming? Report: FEMA Just Quietly Activated Civilian Corps. June 10, 2016 http://newzsentinel.com/is-something-big-coming-report-fema-just-quietly-activated-civilian-corps/ We received reports last week of various employees, citizens and etc. heading down to Atlanta Georgia to either the CDC (Center for Disease Control) and the Center for Community Preparedness (FEMA). Federal Emergency Management Agency is actually activating its Civilian Corps. This is primarily a group of current and former government and military people, many with various training backgrounds to broad to cover here. While this group is unarmed, they are generally drafted from the fighting branches of the US Military, medical and communications. We were informed that several companies in Minnesota responded large numbers of their own veterans heading south. [and from another] 2018 FEMA Project Deadline Moved up to June 30th, 2016 - Why? June 16, 2016 http://allnewspipeline.com/June_30_Deadline_Moved_Up_To_2016.php It appears that FEMA is activating their highly secretive 'civilian corps' in the Atlanta, Georgia area. We should expect electricity, gas and water could be shut down. Food supplies will be hard to get. What this exactly is, we don't know but we know that things are happening very, very quickly in the United States. [and from another] https://www.fema.gov/region-iv-al-fl-ga-ky-ms-nc-sc-tn Region IV covers Alabama, Florida, Georgia, Kentucky, Mississippi, North Carolina, South Carolina, and Tennessee.

What would cause Homeland Security to move the planned re-education of their civilian corps from June of 2018 to this month, June of 2016? This is less than a month’s notice for these retired individuals, and bespeaks a sense of urgency. It would not be the hurricane season, which has been modest and is a known entity. It is not terrorism threats, which would be handled by the local police or National Guard or the US Military. It is not a pandemic, as even the Ebola crisis a couple years ago did not involve FEMA. It is obviously a pending New Madrid crisis of an immense magnitude.

Centered in the Southeast between the course of the Mississippi River and the East Coast, training in FEMA’s Region 4 is positioned between the fault lines expected to rupture when the New Madrid goes. The New Madrid fault line runs up the Mississippi all the way to Chicago, and the East Coast Fault Line runs from Alabama through upper Florida and thence up the East Coast to Boston. Has Homeland Security received information that the New Madrid is ready to rupture? The bow stress in the N American continent is palpable, and there is ample geological evidence available to federal agencies.

As we have stated, the stress on the N American continent will be relieved by the New Madrid rip, not by any other adjustment. The N American continent does not have numerous internal fault lines that can relieve the stress, nor can the continent roll due to its flat top. What other emergency that FEMA might be called to address would paint the scenario that “electricity, gas and water could be shut down. Food supplies will be hard to get.” This sudden re-education of the civilian corp may or may not get into the major news outlets, or may be deemed too alarming and suppressed to avoid sparking panic in the public. Alternatively, the US government may choose to share the evidence they have been collecting, showing for instance an extreme uptick in EMP activity, particularly in the Southeast US.