Recently the media describes that Prince Charles of UK has the desire to become king of Romania in the event that Romanian people decided to return to monarchy. The prince of Wales Charles, 63, is the longest serving heir apparent of the British monarchy. The speculation is that he may choose the Romanian throne in favor of his eldest son, Prince William, the Duke of Cambridge. My question for the Zeta' is: Dose this has anything to do with the PX approaching,UK elite plan? Is Romania going to remain independent, will continued her alliance with NATO or return to former Soviet Union occupation? http://romanian.trends.ro/2011/11/prince-charles-contender-for-king-of-romania [and from another] hhttp://www.dailymail.co.uk/femail/article-2065174/Prince-Charles-king Admittedly, it is unlikely that he will ever be a serious contender for the throne as the deposed King, Prince Michael, is still alive - albeit rather elderly at 90 - and has family of his own. Queen Elizabeth ties with the monarchy are stronger - she is third cousin to Romania's King Michael who reigned from 1927 to 1930 and again from 1940 to 1947. Despite the reintroduction of democracy, in recent years there have been increasing calls for the monarchy to be restored. And after he revealed in an interview just a few weeks ago that he is related to historical Romanian ruler Vlad the Impaler - the bloodthirsty nobleman who inspired Dracula - Charles's name has now, bizarrely, been thrown into the ring. Intriguingly Charles is incredibly passionate about Romania. Indeed, he loves the area around the Carpathian Mountains in Transylvania so much that he has bought a holiday home in the region. Charles secretly bought the simple, white-washed property in the heritage site of Viscri in 2005 with the help of the Mihai Eminescu Trust, a British-based charity which works to preserve Romania's historic Saxon villages from destruction, of which he is patron. He holidays there each summer. He and his security team sleep in the traditional white-washed village house - complete with wooden truckle beds and outside toilets - and drink locally-pressed organic apple juice.

Why would a member of the British royalty "secretly" buy a primitive rural house in Romania in 2005? Excuses abound, but the key points are clear. It has outdoor toilets. It has local orchards making organic apple juice. And Prince Charles has a link to Romanian royalty, and could claim to be succeeding their 90 year old deposed king. The Queen has sought refuge with friends in the US with both presidents Bush and Obama, but felt rebuffed. She is now leaning heavily toward going to Australia, where she has been welcomed. Being royalty may be is considered a ticket, but Prince Charles is the lesser royalty, and fears he will not fare well.

The British royalty knew full well the accuracy of our predictions on Planet X, which arrived in 2003 as expected. The massive magnitude 9.5 quake in Sumatra, at what we describe as the brake point for plate movements, frightened the elite, who publicly assure the populace that everything is normal while watching our predictions play out with certainty. Prince Charles has simply buffered his options. He has given himself an alternative bunker for the pole shift, one seemingly ready made for the Aftertime, in a location where he assumes he will be treated as royalty in the Aftertime.

My feeling is that Mohammed El-Baradei is a sleeper, starchild who waited for his opportunity to step in. Could the Zetas adress this (if he is a starchild, a sleeper who waited to step in? [and from another] http://www.presstv.ir/detail/212376.html Egyptian presidential hopeful and former head of the International Atomic Energy Agency Mohamed El-Baradei has declared his willingness to heed demands of his nation's revolutionary youth to lead a national government if formally asked. The police have harshly cracked down on the protests demanding the military rulers to hand over power. Scores of people have been killed and thousands of others injured in the persisting police violence against protesters over the past several days. Egypt's Supreme Council of the Armed Forces took the helm after the former dictator's downfall, with repeated calls from the public for a civilian government falling on deaf ears. The military council has picked Kamal el-Ganzouri to form a transitional government. The 78-year-old served as prime minister from 1996 to 1999 under Mubarak, and was also deputy prime minister and planning minister. [and from another] http://en.wikipedia.org/wiki/Mohamed_ElBaradei Mohamed El-Baradei, leader of the National Coalition for Change, has been a major voice for democratic change in Egypt since 2009 and was a significant leader during the recent protests. However, he has a rocky history with the U.S. government and supports some policies that do not support current U.S. foreign policy towards stability in the Middle East. El-Baradei was the Director General of the IAEA from 1997-2009. During his three terms, he repeatedly downplayed claims of possible military dimensions to Iran's nuclear program, which undermined U.S. efforts to press Iran over its safeguards violations. According to a July 3, 2003 article in Time Magazine, El-Baradei also maintained that Iraq's nuclear program had not restarted before the 2003 Iraq War, contradicting claims by the Bush Administration. He told the German news magazine Der Spiegel on July 12, 2010 that he wanted to open the Gaza Strip - Egypt border and accused Israel of being the biggest threat to the Middle East because of their nuclear weapons. El-Baradei has called for international criminal investigation of former Bush regime officials for their roles in fomenting the war on Iraq

El-Baradei is not a Star Child but could be termed a sleeper, in that he held back from the Arab Spring and did not participate during the protests to the degree others have. For this he has been criticized, but protecting himself from assassination at a time when Mubarak was still considered a favored puppet of the US and the CIA was an intelligent move. The savvy man bides his time until it is the right time to make a move. He knew the time would come when Egypt would be in need of leadership, from a trusted leader the public knew well, one with a long history of supporting the people. It is clear the Egyptian people will not tolerate another puppet government run by the US and the CIA. Now that the protests are at an end, the battle against Mubarak won but with scant acceptable alternatives to the Egyptian military who are currently in charge, having an interim government led by El-Baradei seems the lesser evil. His time may have arrived!

In New Zealand a Kiwi man is the first amateur photographer to capture another solar system using a 25cm telescope from his Titirangi home. How is this possible and will the anti-blooming or anti-glare technique he used help amateur photographers capture more images of planet X and its moons in the near future? [and from another] http://www.stuff.co.nz/national/6046887/Kiwis-space-photos-stun-astronomers Aucklander Rolf Olsen has captured the star Beta Pictoris, and the disk of debris and dust orbiting it, in a stunning image that has amazed astronomers worldwide. He's proved it's possible to do it with amateur equipment. Olsen first ventured into astro-photography in 2003, but has owned telescopes since 1990. Olsen moved to New Zealand in 2003 from Denmark. The main difficulty is the overwhelming glare from Beta Pictoris itself which completely drowns out the dust disk that is circling very close to the star. Olsen had thought it was impossible to block out the glare using amateur equipment, but had second thoughts after reading a scientific paper from 1993 Observation of the central part of the beta Pictoris disk with an anti-blooming CCD. [and from another] http://www.nzherald.co.nz/world/news/article.cfm?c_id=2&objectid=10769324 An astronomer has captured the first amateur pictures of another solar system from a tiny telescope in his back yard. The material that forms the proto-planetary disc around Beta Pictoris has been photographed by large observatories often before, but it was not thought possible for amateurs to take a picture of the system, because of the glare from the star itself. But by capturing an image of a similar star and subtracting it from the picture of Beta Pictoris, Olsen was able to eliminate the stellar glare, revealing the dust disk.

There is a story hidden within this story. Olsen moved to New Zealand from Denmark in 2003, a time when we were predicting the Pole Shift to strike suddenly, "shortly after May 15, 2003". He moved from Denmark, a country that would surely go under the waves both during the Pole Shift (500 foot tidal waves) or in the Aftertime (when we predict the seas to rise 675 feet). He moved to New Zealand, to one of the best locations for surviving the Pole Shift on Earth. New Zealand will get a significant elevation boost during the plate movements, is a social democracy, and will be tropical in the Aftertime.

Olsen owned a telescope, and Planet X was visible inbound to amateurs during the winter of 2002-2003. Although ridiculed without mercy if they made any public announcements that a sighting of Planet X had been made, many amateurs were recording the movements of the Planet X complex, according to our coordinates, and sharing this information with each other. That Olsen began astro-photography in 2003 should not be a surprise, as this is when dramatic double helix photos of the Planet X complex were possible. Do we expect that amateurs will be seeking Olsens guidance and copying his techniques to view current Planet X complex, lost in the glare of the Sun? They have already done so!

Comparing these 2 shots taken more than 2,5 years apart, of what appears to be the winged globe (also in the right position according to the ZTs), one can notice the size did not vary that much. My question is: should PX look bigger and/or brighter as it approaches Earth when caught by the telescopes, or not necessarily? Why they look having the same size? 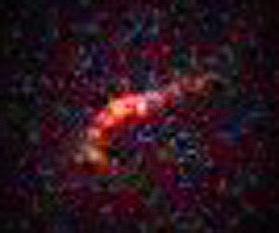 When the Planet X complex was inbound in 2002, being identified on CCD imaging by a team of amateurs, it changed in nature. At first seen as a distinct fuzzy cluster with a bright star-like center, it became diffuse, and the center less dense. What was happening, on the images, was the spread of the complex, so that the Moon Swirls were not seen clustered close to the corpus, but rather the vast dust cloud was spread out. Nancy described this with an analogy of a buffalo stampede, first seen as a cluster from a distance and then later as the buffalo are visible as individual entities. As the stampede gets close, one does not see the entire herd, but only individual buffalo. This does not mean that the herd has gotten smaller. It means you no longer can see the entire herd!

In early 2003, when Planet X could still be seen in the night sky, photo captures of the complex first showed the complex as a whole. Now, with the complex spread out between the Earth and Sun, the Moon Swirls are seen individually, and often confused with the corpus of Planet X itself. The Winged Globe persona is showing the corpus of Planet X with its two dominant Moon Swirls on either side, the double helix constellation often distinctly visible in early 2003 photos. In these photos, as in the SOHO images today, the corpus is the minor player. It is the wings on either side that are noticed, and the trailing tail.

Thus the shape reflecting light remains the same, but the amount of debris on either side, and the size of the corpus itself, cannot be determined. As it gets closer, you increasingly fail to see the complex - the corpus, Moon Swirls, and vast dust cloud - as a whole.