Here is a google Translation of a German article, which actually goes viral on German conspiracy Websites. This one blows my mind. Is there any Truth in it? This would explain, why almost every Refugee has an expensive Smartphone. Could the Zetas please verify?
[and from another] http://www.christ-michael.org/das-gesicht-des-antichristen/ I am a professional engineer for tunneling, overpressure / shielding systems. For German: design engineer of deep bunkers. My personal story begins in February 2001, where the BBR (Federal Office for Building and Regional Planning) announced seven sites for tender to build there range safety systems for the population in case of a mass evacuation. Myself and six other experts in the field found ourselves on 23rd March 2001 at the planning office in Kassel. We first had ten different disclosure agreements signed ten different ministries, including two classified as top secret documents of the Ministry of Defense.  It should seven bunker complexes are built, at seven different locations in Germany, connected with transport trains; Material storage bays, independent geothermal power and water supply from deep wells. Each of the complexes is sufficient for 300,000 people. Then came the Israeli technical crew that installed the energy systems and lighting. The whole thing was so expensive that we had in 2006 alone correct stay within budget, 6x upwards and the policy came increasingly under duress.  The exits are completely disguised as a water protection buildings, electricity, gas and radio building.  It was a complete mosque installed as in all locations.

Has Germany built secret bunkers to survive the passage of Nibiru? Just as is rumored to have been done in the United States, and has been exposed at Mount Weather, other countries have taken steps for their elite. Using taxpayer funds, and disguising these bunkers as a residence or a business, such constructed locations number in the hundreds around the world. What this dying German engineer is reporting it that these bunkers in Germany anticipate housing Muslims almost exclusively. He then hypothesizes that these young Muslim men will be used to kill off German survivors who would not be considered top grade workers for the elite.

Merkel has been an aggressive proponent of bringing in Syrian refugees, who seem to be disproportionately young men rather than complete families with women and young children and the aged. This begs the question, why did these young men desert their families? The suggestion made by this German engineer, in his deathbed confession, is that this refugee welcome is deliberate, to sculpt the population into a worker force rather than a citizen base demanding social services. The refugee influx into Europe has proved to be a disaster, with an aggressive counter push to keep refugees in their homeland, to be resettled there. Was this Merkel’s plan, and has it failed? Yes.

What do the Zetas have to say about Elon Musk's announced plans to colonize Mars per his live presentation today? [and from another] http://time.com/4510653/elon-musk-unveils-plan-to-colonize-mars/ The first human mission could take place in 2024, he said, and could deliver people to the planet in about 80 days. Musk said “The main reason I’m personally accumulating assets is to fund this.”  [and from another] http://www.theverge.com/2016/9/27/13058990/mars-mission-spaceship-announced-elon-musk-spacex The spaceship is meant to launch from Earth on top of the booster and then travel the rest of the way on its own to the Red Planet. As rumored, the Mars vehicle will be reusable and the spaceship will refuel in orbit. This is key, according to Musk, because refueling in orbit makes the trip much cheaper and hence more doable. Similarly, it’s inefficient to bring propellant for the return trip. Ideally, a team would build a propellant plant on Mars and send the ships back that way. [and from another] http://www.space.com/34211-spacex-mars-interplanetary-transport-concept-video.html It features a list of specific technologies that could be used in a human mission to Mars, including a launch from Earth and on-orbit spaceship refueling, the use of solar arrays to power the human space capsule, and a booster-powered descent onto the Red Planet. [and from another] http://www.dailymail.co.uk/sciencetech/article-3810357/Elon-Musk-unveils-radical-interplanetary-transport-make-humans-multiplanetary-species.html The thing that really matters is making a self-sustaining civilization on Mars as fast as possible. One path is we stay on earth forever and there will be some eventual extinction event. I don't have a doomsday prophesy. The other is to become a spacefaring and mutiplanetary species, which I think some would say is the right way to go -  that's what we want.

This is a money making endeavor by Elon Musk. The dates are all set out far enough into the future that he will not be challenged to deliver any but showy demonstrations on the Earth’s surface. Meanwhile, as the Earth changes progress, scaring the wealthy class, he will collect their funds. This will allow Musk and his cohorts to arrange a kingdom on Earth – secure, well stocked, and very high tech. This is hucksterism at its finest, a complete con job. He knows from the smackdowns that the Council of Worlds has given him that he cannot setup on Mars, the latest the dramatic explosions of the FaceBook satellite launch.

Was Hillary Clinton using concealed communications devices during the first Presidential debate? Photos appear to show objects worn underneath her pantsuit and in her left ear. What were these devices and why was she wearing them? [and from another] Was Hillary wired for Trump debate? http://www.wnd.com/2016/09/was-hillary-wired-for-trump-debate/ Images have emerged following Monday night’s 2016 presidential debate between Democratic Party nominee Hillary Clinton and GOP nominee Donald Trump that are fueling widespread speculation online that Clinton may have been wired for the event. And some say she may have been wearing a battery pack, an earpiece, a microphone and a wire. Charisma News cited a Reuters image that it said appeared to reveal a flesh-colored earpiece in her left ear. [and from another] Photos: What’s That Under Hillary’s Pantsuit During Last Night’s Debate? http://www.infowars.com/photos-whats-that-under-hillarys-pantsuit-during-last-nights-debate/ Photos from last night’s presidential debate appear to show Hillary Clinton with some kind of device hidden under her clothing. Images being circulated on Twitter show what appears to be the shape of a box under Hillary’s red pantsuit, with a wire from it running up her back. [and from another] Was Clinton wearing a secret device during the debate? Evidence emerges http://www.catholic.org/news/politics/story.php?id=71077 Hillary Clinton was wearing a device during her debate with Donald Trump. Was it a microphone? A medical pump designed to inject medication? How about a receiver to pipe responses into Clinton's ear? These are the very reasonable questions that have come up following the revelation that she has a devastating illness and was wearing an earpiece during a major interview a few weeks ago. 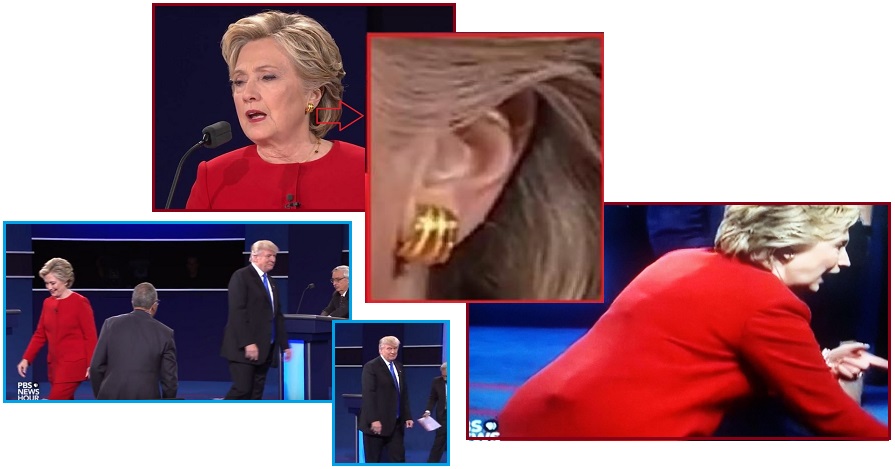 Hillary wore a special suit constructed for her first debate with Trump. This concealed a back and hip brace that allowed her to stand upright and not wobble for 90 minutes, medicine injection devices that kept her Parkinson’s symptoms of a cough and seizures at bay, an emergency defib device, and steroid injections that kept her from falling asleep and displaying MS symptoms such as the wandering eye. Will this suit save her? An optimum performance for 90 minutes cannot be maintained as her health issues and medicines conflict, and rage over the tight race makes her health worse. Hillary had a transmitter that fed via wifi to a receiver placed high in her outer ear. She also had a special tablet among notes on her lectern that displayed words remotely sent to her. This was why she kept looking down. In addition, the moderator, Holt, was responding to signals Hillary gave to him, touching her nose and face in various ways.