Portugal, stretched out along the Atlantic, will find itself subject to various assaults during the week of rotation stoppage and the hour of the shift. During rotation stoppage, with the Atlantic put into a stretch before it tears along the Atlantic Rift, Portugal will find itself with higher tides and flooding inland where rivers normally flow out, reversing the tide. During the hour of the shift, water resisting the movement of the crust will seem to flow rapidly past the shores of Portugal, moving from the Polar Circle toward Brazil, which will be moving up toward the North Pole position. Rushing water is subject to tidal bore to an extent than most of mankind would not even contemplate possible, and can rush up mountain ravines and even over mountain ranges thousands of feet high. Those who would survive are advised to migrate into the high mountains in Spain for the shift, and afterwards plan to migrate into Africa, as the deserts there may have a wholly different climate in the Aftertime, and the long coastline of Africa will be very temperate, being stretched out along the new Equator.

Being along the coast, Portugal takes the brunt of the tsunami and since much of its landmass is lowland the force of water during any tsunami or tidal sloshing will run up into valleys and along river beds. For Portugal, surviving the pole shift itself will entail seeking high ground 100 miles inland and more than 200 feet above sea level, to account for the lost elevation anticipated during the hour of the shift. Allow an addition 100 feet in height. Tsunami rapidly lose their force and height as they roll inland, as the water must spread over the land and thus drops in depth almost instantly. This is a coastal phenomena, solely. Though Portugal and Spain will lose 50 feet in elevation due to the stretching of the Atlantic, after the pole shift, land above 725 feet in elevation there will remain above the waves, but our advice is to escape to Africa where more land mass per person can be expected. The bridge to Africa will be a heavy migration route, and thus looting and continual confrontations can be expected for those who cling to their homeland in any Portugal highlands. 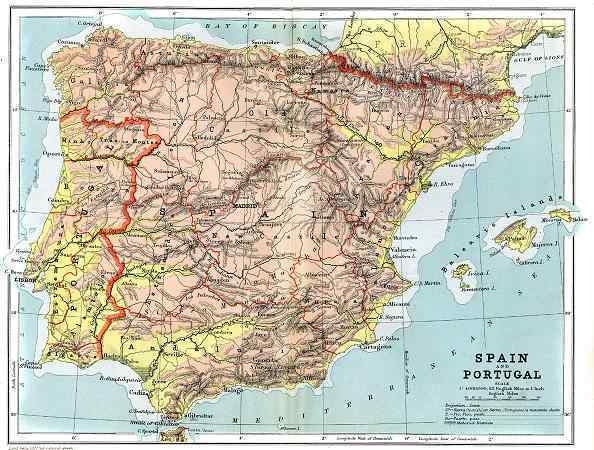