Mexico will in general do well during and after the shift, as subducting plates are more of a problem for the West Coast of the US and Canada than Mexico, there being more broken plates in the general area of Central America to take the shock. Where much of Mexico will remain intact after the pole shift, but those portions close to Central America will experience the same destruction from fault line crossing and plate crumbling that Central America and the Caribbean will experience. When large plates are on the move, slamming into each other, small plates are crushed, being the small-fry in the fray. Mexico has an additional caution in that Central America will disappear under the waves when the Pacific shortens, the many small plates being the point of least resistance against larger plates surrounding Central America. Stay inland, central to Mexico as a country, for best results.

The inland desert or semi-desert regions of Mexico, which suffer from a lack of water when westerly winds dump their moisture when first coming inland, will find their climate changing. They will flourish in vegetation in the Aftertime, due to a changed climate, which will remain temperate and fairly close to the equator. With oceans to the new south and north, they will find rains plentiful, and these former deserts will bloom. However, there are several cautions when choosing a safe location within Mexico. As with any country, active or inactive volcanoes should be avoided, staying at least 100 miles from either. However, the volcanic activity that plagues the current southern Mexico will be moved to the far east of the new Mexico, blowing away from, rather than across, the land. Coastlines should be avoided, staying 100 miles inland and at least 200 feet above sea level to avoid tidal waves.

After the pole shift, the venting volcanoes along what is now the edge of the N American Plate where it crosses Mexico will vent away from Mexico. Volcanic ash, via what will be the new prevailing westerlies, will be carried out past what is now Central America, and thence out over the Pacific ocean. Today, this ash blows to what is now east, toward the Yucatan. Those survivors in what is now southern Mexico should migrate to what is not the north of their country, into formerly hostile desert country. The new geography will have Mexico stretched out along the new Equator, in a very temperate climate not unlike it enjoys today. The Mississippi Valley will flood within two years after the pole shift, and this will change the weather for the desert regions of Mexico. Fronts will push down from the flooded Mississippi Valley as well in from the Pacific, and both fronts will be water laden. Thus, when these fronts clash and form rain, the desert will bloom.

Your answer is in the rock strata of Mexico, which we encourage you to research. The volcano belt of Mexico, and its active volcanoes, almost precisely follows a particular rock stratum, which has been formed in the past from extruded magma, and has outlets to the magma today. Avoid these areas. Volcanic ash will flow to what is now the south in the Aftertime, so the best bet is to head north of this volcanic belt, into what are now the deserts of Mexico, which will bloom in the Aftertime. 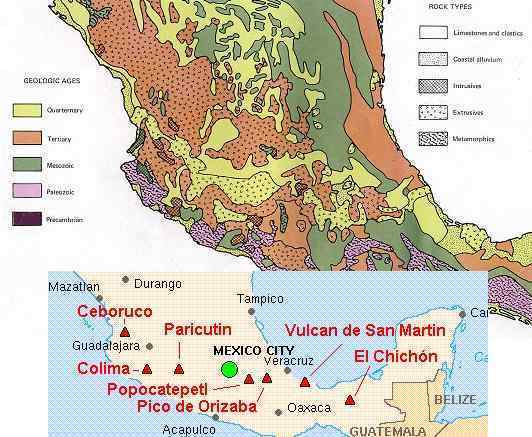 Areas of the world where armed conflict is almost a way of life will have a sorting out period after the pole shift, during which the gangs with weapons primarily will kill each other off. This will be true in Somalia, for instance, or war-torn countries like Afghanistan or Iraq, and certainly those regions of Mexico where drug lords are defending their territories. Drug gangs operate with the techniques characteristic of the Service-to-Self - the pecking order is established and then maintained with brutality. Control is paramount, the need for control a characteristic of the Service-to-Self, so this is the first issue to be settled when the Earth changes create a shake-up.

If the police are distracted because earthquakes or sudden crevasses have created havoc, then the drug gangs will try to take advantage of the situation. Any move by a gang normally brings counter moves by a competing gang, so this is followed by gang warfare. Meanwhile, the citizens cower. Eventually, as we have so often described, these gangs run out of ammo and cannot get re-supplied. They also kill each other off, and are so busy fighting among themselves that they fail to attend to basic survival needs such as food and water. They do not tend to their sick or injured. The local citizens also take their opportunities to rid their locale of these troublemakers, who are likely taking what little food or water the local citizens have. Such a cleanup may take longer in conflict regions, but the outcome is inevitable.