The lowlands of Germany suffer from inundations both during the tidal waves that will assault the coast and as a result of melting poles. Inland, in the high land, there will be many safe areas. Those in Germany would do best to take a middle ground between the inundations from the Coast and mountain building in the Alps. The foothills are safest during the shift itself, as they are shielded from volcanic eruptions from the south by the mountain ranges between them, and will not take the rough ride that those directly in the Alps might experience during the rapid mountain building that will take place during the hour of the shift. After the shift, during the next two years when melting poles are evident, movement into the high ground is advised. Anticipating that the sea will be closer, and will have abundant kelp and fish due to the high incidence of carbon dioxide in the air, fishing for food should be part of the plan.

Germany's neighbors to the east in Poland will find the higher land in the mountains attractive after the shift when the poles are melting and the waters rising. Being sea-going folk, they will have ships at their disposal and will take to these, arriving at the mountain peaks sticking above the water in large numbers. Other countries such as Czechoslovakia which also have mountainous territory will likewise be inundated, but depending on the reputation of the country will be considered inviting or not. Where the lands were formerly held by productive and efficient people, such as Germany has, and has hosted workers from many lands due to economic booms, these places will be remembered as welcoming. Germany's reputation, thus, will doom it to be remembered as a place to migrate to, with the potential of finding shiploads of survivors on the horizon. 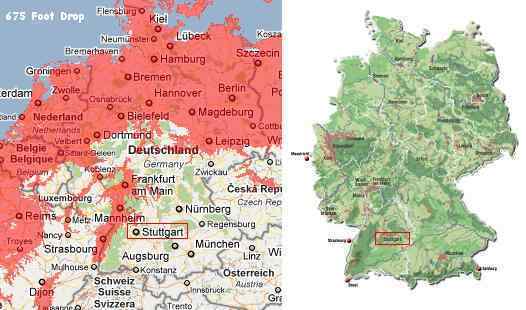