With no warning or explanation, the NICT magnetic simulator, http://www2.nict.go.jp/y/y223/simulation/realtime/index.html run from Japan with data from the ACE satellite, went down. This was a subtle failure, as old data was posted as current, repeatedly, for days, but the flat graphs showed the refreshing presentation to be a lie. None of the popular simulations of the magnetosphere were to be shown, and no explanation from the webmasters. The freeze started on August 19, 2010 at 1:30 am UTC, and has been ongoing. However, other sites receiving data from the ACE computer did not report this outage. It was only to be the user friendly diagrams that NICT provided to the public that was to be eliminated. So the common man could not understand and perceive ../index/zeta542.htm the gyrations that the Earth's magnetosphere was experiencing for the past year. ../index/zeta536.htm 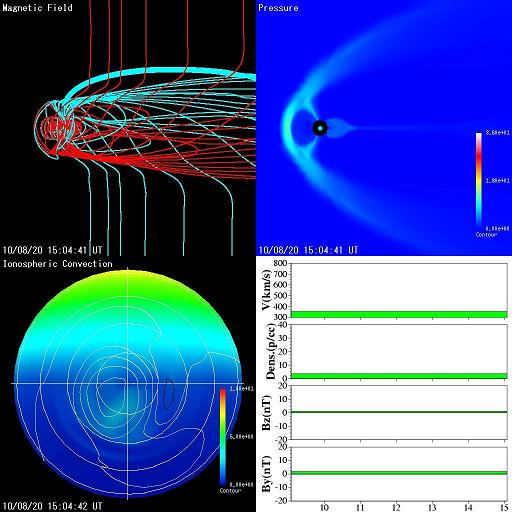 Right on the heels of this unannounced and unexplained freeze at the NICT site, SOHO images became frozen. This occurred just after 1:00 UTC on August 20, 2010 for the EIT images of the SUN, but the familiar red and blue images of the Sun's Corona were frozen a few hours later, after approximately 13:00 UTC on August 20, 2010. The freeze was deliberate and not the result of a satellite failure. When the freeze on the face of the Sun occurred, EIT 195 was only a quarter filled out for 1:13 UTC on August 20, 2010 but by the next day had been replaced by a full image dated 13:13 UTC. So they had the data. They just were under orders not the share this with the common man! 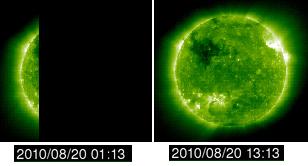 Why the freeze? The last time they tried to blame the Sun for a magnetic blast coming from Planet X was on July 31, 2010 when the magnetosphere deformed, as detailed in Issue 197 ../newsletr/issue197.htm of the newsletter. Taken by surprise by what Planet X was doing to the Earth's magnetosphere, NASA quickly mustered a media campaign based on a tiny C3 solar flare, stating that the Earth could experience a "tsunami from the Sun". But since it takes 2 days for solar activity to arrive at Earth, they had to claim during their August 1, 2010 media campaign that it would be August 3 before this tsunami would be experienced. Meanwhile, on July 31, 2010 the magnetosphere had deformed. Too little too late from NASA, so this time, their tactic was to be different. This time they would blind the public prior to their disinformation campaign. Meanwhile, they are making a media announcement that we can expect a magnetic storm from the Sun, this time from a coronal hole which only sophisticated instruments in their control can observe. This from the SpaceWeather site. http://spaceweather.com/ 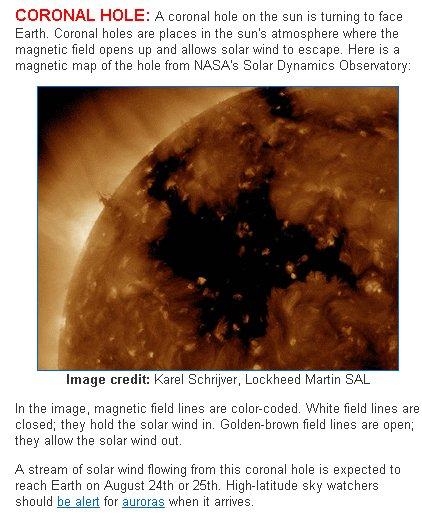 Those who hoped to be able to blame the Sun for any magnetic problems Planet X may cause, as well as tie the weather and even earthquakes to solar activity, have been deeply disappointed of late. The Sun continues to be sleepy, at a time originally set to be the solar maximum. Meanwhile, the popular Japanese NICT website, which showed so clearly that the S Pole of Earth at times was going missing or was twisted the reverse of what would be expected, is frozen. They hoped you would not notice that the same chart is being presented, hour after hour and day after day. Almost in step with the freezing of the NICT charts after 1:30 on 8/19, the SOHO images of the Sun were frozen as of approximately 1:00 on 8/20. Meanwhile, yet another warning that something was coming from the Sun was issued, this time a large coronal hole with expected increases in the solar wind, anticipated aurora activity which implies a magnetic blast.

But unless every satellite stops delivering data to the public, or is programmed into a coordinated lie, this maneuver will not work. NASA is trying to anticipate the twists and turns that the dance between the Earth and Planet X will take. They were embarrassed by their last failure on July 31, when the magnetosphere suddenly showed the bowshock deforming on NICT, and had to scramble with an excuse of a blast anticipated from a mere C3 solar flare on August 1. The "tsunami" they predicted offered only a few auroras, a tepid display. This time around they are hoping to tip the balance by removing all tools by which the public could come to their own conclusions - the popular SOHO charts and the popular NICT charts. Thus when the blast they anticipate happens, on a date anticipated by many psychics and contactees to be August 23-25, they can point to their warning about the coronal hole warning and say this was worse than expected, but still had been predicted from solar observations.

Coronal holes can only be detected by x-ray imagery, which requires equipment that is not in the hands of amateurs. NASA has these, from their SOHO satellite. Thus the public is, so they hope, blind, and forced to accept their conclusions! But what actuality is happening are two things that will further embarrass NASA. The first is that rather than being active, the magnetic blasts the Earth is getting are so quiet as to be almost nonexistent! HAARP is flatlined. Space weather is deadly calm. Will NASA rig every outlet by which the public can see this so it is producing false data? Will they take down every transmission from a satellite, every bit of data provided by HAARP in Alaska, in their effort to totally control what the public perceives? If space weather continues calm, and the issue of these continuing outages of data which used to be supplied to the public grows viral on the Internet, what then? They have, in any case, raised suspicions that they are up to something. They are almost guaranteed to fall on their face, again, by crying wolf repeatedly when the magnetic blasts they predict do not occur. But what is certain is that the public senses they are being lied to.

Where sunspots are magnetic in nature, but can be spotted from Earth with amateur photography equipment. Unfortunately for NASA, the Sun is sunspot free at the moment. But a coronal hole can only be detected via x-ray images such as the GOES-14 satellite provides. 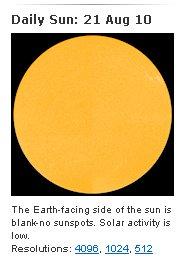 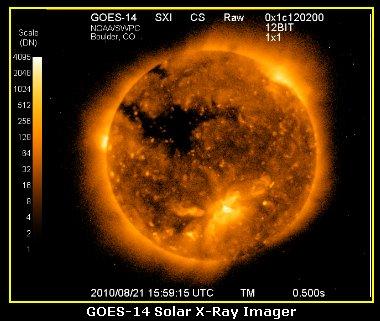 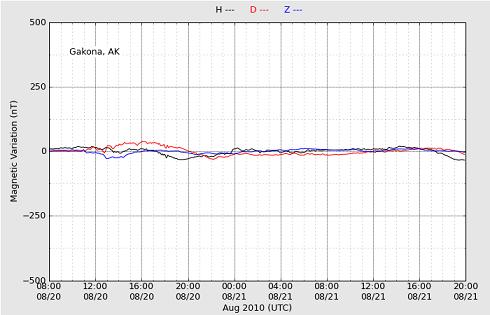 [and from another] Coronal Holes http://solar-heliospheric.engin.umich.edu/hjenning/Corona.html These are regions where the corona is dark. They are often found at the Sun's poles, and are associated with open magnetic field lines. Most of the solar wind originates from these holes in the corona. They can only be seen by looking at the Sun through an X-ray telescope. [and from another] Coronal Hole http://www.angelfire.com/stars5/astroinfo/gloss/c.html An area where the extreme-ultraviolet and X-ray coronal emission is abnormally low or absent; a coronal region apparently associated with diverging magnetic fields. A great part, if not all, of the Solar wind starts from coronal holes.