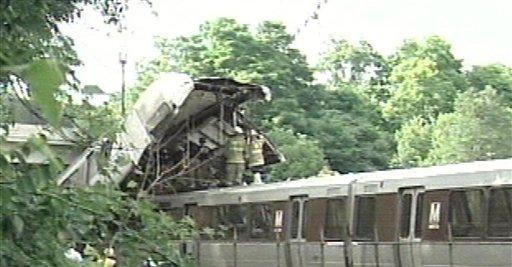 9 Dead After Metro Accident [Jun 23] http://www.wtop.com/?nid=25&sid=1702179 An inbound Metro train smashed into the back of another at the height of the Monday evening rush hour, killing at least nine people and injuring scores of others in Metro's deadliest ever subway accident. Experts familiar with Metro's operating systems tell The Washington Post operator error and failure of the signal system likely caused the deadly crash. To prevent trains from colliding, Metro designed a fail-safe computerized system that controls speed and breaking. If trains get too close to each other, the computers are supposed to automatically apply the brakes. Officials had no explanation for the cause of the accident that happened as the six-car trains were headed toward the Fort Totten station. The trains' devices that record operating speeds and commands are being turned over to the National Transportation Safety Board. The FBI is on the scene Tuesday morning. Metro officials say the FBI is assisting the NTSB with evidence collection.

Clearly the brakes worked, and were responsive to the computer system. The train had slowed and announced it was stopping. The emergency manual brakes likewise worked, and were applied just ahead of the crash. So if all systems were operational, then what caused the failure? If the computer system concluded that the way ahead was clear, then the signal transmitted to the oncoming train from the tracks ahead was lost. We have mentioned the increasing problem of electro-magnetic pulse caused by the charged tail of Planet X. Where brownouts and blackouts occur, this is covered in the media by various excuses such as an overtaxed electrical system. But these pulses affect systems other than the grid, as the downing of Air France 447 shows. Increasing incidences such as this will be occurring.

Investigators Seek Why Automated Train Didn't Stop
June 23, 2009
http://news.yahoo.com/s/ap/20090624/ap_on_re_us/us_dc_metro_train_derailment
Safety officials also are investigating a passenger's statement that the train had stopped briefly then started again before the accident. When the train is in automatic mode, the operator's main job is to open and close the doors and respond to emergencies.
Chronology of Capitol's Deadliest Public Transit Disaster
June 23, 2009
http://hosted.ap.org/dynamic/files/specials/interactives/wdc/train_derailment/index.html?SITE=YAHOO&amp;SECTION=HOME
According to one passenger an announcement was made before the crash that the train was stopping because there was another train ahead. Soon after, the train started moving. Within second, it strikes the train stopped ahead.
Computer Failure Could Be Cause of DC Metro Crash Killing 9
June 24, 2009,
http://www.novinite.com/view_news.php?id=104972
The emergency brake button was depressed, and the steel rails showed evidence that the brakes were engaged.
Cause of Washington DC Metro Crash Under Investigation
June 22, 2009
http://www.petergreenberg.com/2009/06/23/cause-of-washington-dc-metro-crash-under-investigation/
The investigation is complicated by the fact that the rear train was not equipped with data recorders, which will make it more difficult to piece together what happened.