After the Christmas Hammer made its appearance on December 19-22, it disappeared for several days and the live seismographs were dead quiet. When they restarted with globals again on December 27, the global was not happening at 8:00 UTC as it had during the Christmas hammer, but hours. This would mean that the violent push against the magnetic N Pole of Earth was happening earlier, because Planet X had moved to the right. [and from another] At the same time, an object with a tail was captured on a C2 image by the LASCO satellite, just where one would expect Planet X to be if the Earth had moved to the left a bit, in the view from Earth, to escape Planet X which was now appearing on the right. Checking Skymap and the LASCO C3 images for comparison, I note that Mercury is near the Sun to the lower left at about the 8 o'clock position, but no planet is expected to be to the right of the Sun at the 2 o'clock position on December 23. The LASCO C3 takes in a larger view of the sky, six times wider than the C2 images. Thus on the C3 one can see the position of Mercury and the lack of any other planet in the area of the object with tail captured on December 23. On December 23, Jupiter is behind the Sun, fully occulted, and just beginning to emerge on December 24 at the 3 o'clock position. In any case, Jupiter shares the typical planet appearance of the LASCO images, looking like a tiny Saturn with horizontal rings. The object that appeared on December 23 had a distinct look, like a planet much larger than Mercury, much closer to Earth, and not creating the Saturn appearance with horizontal rings! The fact that they seem to have Saturn like rings is due to the same phenomena that causes stars to appear to have horizontal and vertical lines when we squint at them in the night sky overhead. But this object captured on December 23 has a distinct tail drifting to the left. Could this be a meteor shower? This is not the pattern of a meteor shower captured by LASCO, as these examples from November 30, 1998 and February 7, 2003 and September 12, 2003 show. LASCO also suffers from proton bombardment, but the object with tail captured on December 23 does not look like a proton bombardment either, as this example from October 28, 2003 shows. Packet loss, which is caused by light overload, also has a distinct pattern on LASCO, as these examples from June 23, 2003 and May 27, 2003 show. 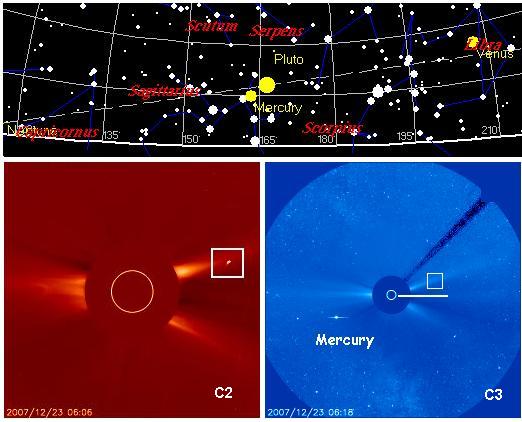 We have mentioned that as Planet X begins to turn the hose of magnetic particles from its N Pole toward Earth, that Earth would try to escape by moving as far to the left as possible, putting Planet X to the right of the Sun in the view from Earth. Earth is trapped in an eddy flow of particles that come from the Sun, come around from behind the monster Planet X, and flowing rapidly around the sides of Planet X form a backwash of particles that prevent the Earth from escaping. Just as a stick stuck in the middle of a river might have water rushing past on either side, preventing a seed bobbling about in front of the stick from moving on downstream, the Earth is trapped in this eddy flow.

The Christmas hammer that occurred on December 19 through December 22 seemed to disappear on December 23, for days. What happened? Faced with an increasingly aggressive hose of magnetic particles from the N Pole of Planet X, the Earth was pushed away, and for a time this will ease the intensity of the hosing. But the Earth can only move so far, as she cannot escape the cup created by the eddy flow. Planet X has been in the process of doing a 270° roll, turning its N Pole outward during this roll. This will eventually result in the Earth having the hose of magnetic particles from Planet X hosing directly at the Earth, resulting in the 3 days of darkness foretold in the Bible as the N Pole of Earth tips away. Earlier in the year, fairly rapid progress was made in this 270° roll, but at the point where this roll had progressed to 150°, we stopped reporting on its progress. We did so to prevent the establishment from being able to judge when to declare martial law or take other steps that would harm the common man.

Planet X seemed to slow in its progress, thereafter, as had it kept up the rate of progress the time of 3 days of darkness would already have occurred. What slowed the progress? Even though the Earth is a minor magnet, compared to the monster Planet X, it nevertheless has an influence on Planet X. The Earth, with its magnetic N Pole presenting during Earth's rotation and hosing toward Planet X on a daily basis, was pushing back. But the imperatives that drive Planet X in its sling orbit prevailed, and Planet X continued in its roll despite the resistance Earth represented. Now Earth has moved back, been pushed back itself in fact by the force of magnetic particles coming from Planet X, and has scuttled back as far as she can go. This places Planet X to the right of the Sun, in the view from Earth, where the angle is optimal for sunlight to reflect off the imposing Planet X complex - the corpus of Planet X surrounded by its close hugging dust cloud and moon swirls.

Do you suppose Planet X remained in place, unaware of this bit of breathing room? Of course it turned, filling the gap and progressing along its 270° roll, so now Planet X is once again poised to point its N Pole toward Earth and the hammer will return! This is a dance that will not end until Planet X has passed the Earth, outbound, leaving the Earth twisted and shaken behind it. The Earth cannot escape, and the progress of Planet X will not halt.