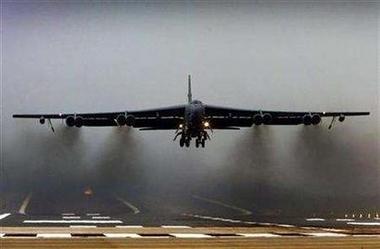 Can the Zetas tell us what really happened concerning the news about a US airforce plane carrying 5 or 6 nukes overflying the US? [and from another] Sources: B-52 Mistakenly Carried Nukes [Sep 5] A B-52 bomber was mistakenly loaded with five nuclear warheads during a flight from North Dakota to Louisiana. The bomber carried advanced cruise missiles as part of a Defense Department program to retire 400 of the missiles, the Military Times said. The nuclear warheads should have been removed before the missiles were mounted onto pylons under the bomber's wings for the Aug. 30 flight from Minot Air Force Base in North Dakota to Barksdale Air Force Base in Louisiana. He said an investigation was launched and the crews involved in loading the missiles were decertified pending corrective action or training.

Closely examine the excuses given out by the Air Force and you can see what actually happened here. These nukes were being taken out of the country. The fact that they were missing from the arsenal was not to be discovered until after they had escaped the continental US, having been moved from the heartland to the Gulf where they could be transferred to a ship along the convoluted and unprotected Louisiana coastline. The locals go fishing daily, and does anyone check those boats as they go off into the Gulf? The Air Force states the nukes were "never out of their control", admitting this theft was an Air Force operation. Ah, but it was an oversight that the nukes were not removed from the missiles, no? No. The list of steps that had to be overlooked was lengthy, involving numerous people, to ensure that just such a happenstance would not occur. For instance, person A makes a step, person B makes a step, both in the presence of each other. Person C asks both if they have performed their step and checks the results, noting this on a form next sent on to an office. Person D comes in independently from that office and verifies the step was done, also checking with persons A, B, and C. And this would be just for a single step.

So were all these individuals involved in the theft of five nuclear warheads? Note that if the person from the office where the form was sent were looking the other way, then the step does not necessarily need to include persons A, B, and C, or even person D if he was unaware a duty was to be performed. The order to perform the step in the first place would simply not be made. The higher up the chain this lack of oversight goes, the fewer the number of people who need to be involved in the conspiracy. But such a conspiracy presumes that those normally involved in this type of procedure are brain-dead, or so in synch with orders from above that they question nothing. It also presumes that we, the telepathic Zetas, would be unaware of such a plot. As we have reiterated numerous times, we and humans in the contingent that is blocking Bush stop operations that Bush orders. Normally, these operations are stopped early, before the public becomes aware of them. The new plan is to allow the public to become aware of the plots, where possible, so as to expose what Bush is attempting to do. This was one such opportunity.

What were Bush and Company trying to achieve? Bush has been desperate to invoke martial law within the US, and needs a panic within the American public to do so. He is being blocked from simply declaring martial law, which he has attempted numerous times. Bush has also been trying to bomb and/or invade Iran, and has given this order numerous times. He has shuffled commanders, each time finding his new commanders are blocking his orders too. We mentioned years ago that many in the US military maintain a façade of cooperation with Bush, but are sleepers, having arranged to put themselves in influential positions for just such a time when they might be given an illegal order, which they could then refuse. Bush and Cheney concluded that if US nukes could be smuggled out of the country and put into the hands of contractors loyal to their masters and the almighty dollar, they could start something - bomb US facilities and point the finger at Iran, or potentially bomb a facility in Iran so as to incite a counterattack. Once again they have failed, but what they did achieve was a heightened sense within the contingent blocking Bush that they must act, as Bush is pulling out all the stops. The contingent must now move from passive resistance to a state of war!