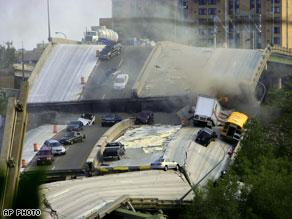 7 Dead, Dozens Injured In I-35W Bridge Collapse [Aug 2] Interstate 35W bridge spanning the Mississippi River in Minneapolis collapsed, sending cars, people and debris into the river below. The collapse was likely structural in nature. It was not an act of terrorism. The bridge was undergoing repair work when it collapsed. Of the eight lanes on the roadway, four were closed for repair to the 40-year-old bridge's deck, joints, guardrails and lights. None of it would be related to the structure. The bridge was inspected by the Minnesota Department of Transportation in 2005 and 2006 and that no structural problems were noted. [and from another] Bridge Collapse Probe Focuses on Unexplained Shift [Aug 3] http://www.cnn.com/2007/US/08/03/bridge.structure/ Investigators trying to figure out what caused Wednesday's massive bridge collapse are focusing on the southern end of the span. The NTSB says one part of the bridge shifted 50 feet as it fell, while other sections collapsed in place. What's getting investigators' attention is the way the southern part of the bridge fell in a video they've already examined -- recorded by a security camera near the bridge's north end -- and the way the section settled after the collapse. It appears that it has shifted approximately 50 feet to the east and when we compare that to what we've seen in the rest of the bridge -- the rest of the bridge appears to have collapsed in place. [and from another] I live in a suburb of Minneapolis and nothing has ever happened like this before. There were reports in the news of a 'rotten egg smell' and an outbreak of of algae just a few days prior to this. I also felt, or heard, a strange frequency a couple of hours before this happened. [and from another] VIDEO: YouTube at Moment of Collapse http://www.youtube.com/watch?v=osocGiofdvc

We have predicted that bridges crossing the Mississippi will be affected when the New Madrid and related fault lines adjust, going into the pole shift. Was this bridge collapse which crossed the Mississippi in Minnesota caused by such an adjustment, the footings on one side of the bridge moving in an opposite direction from the footings on the other side, or perhaps the bridge being pulled apart? The Mississippi River is born in Minnesota, tumbling out of the headwaters in the highlands of Minnesota over a series of natural falls. This is a clue that adjustments in the rock strata could be involved. The highlands of Minnesota come to a point at Minneapolis, with lower land lying to the East along this point. What caused the land to the East to drop, unless this land was stretched in the past?

We have stated that the ripping apart of the St. Lawrence Seaway ends in the rumpled Black Hills of SD. Run a line from Montreal, at the mouth of the seaway, to Rapid City, SD and the line runs through Minneapolis. Why would an adjustment be made in the middle of this stretch zone while the seaway itself did not part? When we described the diagonal pull the N American continent is enduring, and just how this will snap when adjustments are made, we did not intend that this process would occur smoothly, all at once as described. Weak points along the rip lines give way one by one, each such adjustment placing stress on other points in a domino manner. The I35W bridge, being the larger of the bridges crossing the Mississippi at this point, was less able to adapt to a change in position vis-a-vis its footings on either side of the river, as it was an interstate bridge supporting several lanes, and thus had massive and thus rigid supports. Smaller bridges have more flexibility as they are built to withstand uneven loads on either end, thus are more springy by design.

Will there be more such disasters along the Mississippi and in the cities that will be affected by the New Madrid and seaway rip? This is just the start, and when the pace picks up, there will be no question that something other than Global Warming is the cause.