On Feb 10, 2006 the Zetas warned that the Seaway would rip open well ahead of the pole shift.

The primary drama preceding the pole shift will be the ripping action that a plate unable to move must endure. The stress on the N American plate will resolve by ripping the St. Lawrence Seaway open. A widening Seaway also does not affect just those land masses bordering the Seaway, as buckling occurs inland and afar. What does man assume caused the Black Hills to be so rumpled, with the appearance of a recent bucking and heaving? This is the center of a land plate! The tearing of the Seaway does not end at Duluth, MN, it travels underground to S Dakota!
ZetaTalk N American Rip, written Feb 10, 2006

On Sep 29, 2003, commenting on the New York City blackout in August, 2003 caused by a failure in the Niagara substation that bridges the seaway, the Zetas also warned that gas and oil pipelines would rupture during the stress preceding the pole shift.

As with derailing trains, which cannot be explained by any but earth movement, and exploding gas lines or broken water main, which likewise point to earth movement, electrical systems are fragile, a single broken point causing domino effects. But the problems are more than single breaks, they are massive breaks, of major cables running underwater between European countries, of entire connections across a seaway tearing apart, of whole substations fracturing so all connections coming in or out are essentially broken. Large mechanical breaks, and not the ones that should be the focus of concern. Electrical breaks result in lose of electrical power, the public being plunged into darkness or without communications, but far worse than this are breaks that are about to occur in gas lines and gasoline refinery and distribution networks. When these break, as break they will, there will be explosions and fires that will not be so easily corrected nor subdued. A holocaust, an inferno, one that spreads without abatement along the distribution lines, so hot and intense that none can approach.
ZetaTalk Power Outages, written Sep 29, 2003

On Nov 29, 2007 the major oil pipeline from Alberta, Canada to the midwest ruptured in upper Minnesota. It had ruptured weeks earlier and been repaired, but ruptured again for no known reason. Per the Zetas, this was a seaway rip. 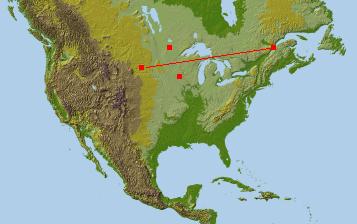 Fire at Major US Oil Pipeline Kills 2
Nov 29, 2007
A deadly fire at a pipeline from Canada that feeds oil to the United States sent oil prices soaring. Two workers fixing the underground pipeline were killed when fumes apparently escaped and ignited the blaze. No other injuries were reported. The fire along the Enbridge Energy pipeline in northern Minnesota was reported shortly before 4 pm [Wednesday, November 28]. The 34-inch pipeline carries crude oil from Saskatchewan to the Chicago area. The pipe had leaked a few weeks ago and was being repaired. It appears as though one of those fittings may have failed and caused fumes to leak, and it caught fire. Clearbrook is about 215 miles northwest of Minneapolis.