An Air Ambulance was almost hit by a drone. Drones can be bought or assembled by the public. Has this been a tool the elite hoped to use gone muck? What about the effect of EMP on drones or self-driven cars? [and from another] Prince's Helicopter Horror as a Lethal Drone comes within Half a Second of his Air Ambulance in Dramatic Near-Miss March 25, 2017 http://www.dailymail.co.uk/news/article-4349456/Drone-hits-Prince-William-s-helicopter-near-miss.html Medics on board reacted with horror when they spotted the device within feet of potentially downing their helicopter.  Last night aviation experts said the drone could have downed the helicopter, killing those on board and potentially causing more casualties on the ground. They can be bought cheaply and are simple enough to fly, but they have a capability which ten years ago would only have been in the hands of the military.  A drone would be quite likely to go through the screen at the speed this helicopter was flying, depending on the angle of impact and where it hit. It could be fatal for the pilots. A drone could also sever hydraulic lines or interfere with the gearbox. Drones cost as little as £25 and can travel at up to 50mph, but do not require a license to operate. Tens of thousands of the devices have been sold in Britain since they have become affordable for consumers. [and from another] https://www.bloomberg.com/news/articles/2017-03-25/uber-autonomous-vehicle-gets-in-accident-in-tempe-arizona [and from another] https://www.wsj.com/articles/uber-suspends-self-driving-vehicle-program-after-accident-1490468860 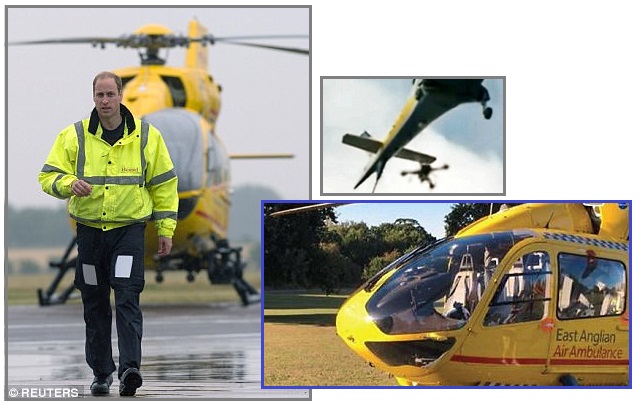 Once again the elite lose. Where the use of drones was spearheaded by the Military, to avoid the need for human boots on the ground or human eyes in the air, it has now gone amuck. Unless development of drones for commercial and entertainment reasons had been quickly outlawed, which it was not, then the inevitable happened. The elite hoped to spy on survivors after the Pole Shift, when the opposite is likely to occur. Robots and drones are also subject to a surge or brownout during EMP, so a drone can crash or a robot open a door it was sent to lock. Once again this is an elite fail, their plans turned upon them. Such is karma.

Why are the elite trying to cheat death and live forever? Head transplants, and then Elon Musk wants to be able to transfer brain activity from one head to another. Cities in the sky, already we have the floor plans but mankind is nowhere near able to harness as asteroid for floatation. Is this alien envy, trying to control gravity? And what about the new two-seater drones, that look and act like UFO saucers. Alien technology envy? [and from another] Silicon Valley’s Quest to Live Forever. April 3, 2017.  http://www.newyorker.com/magazine/2017/04/03/silicon-valleys-quest-to-live-forever One approach to defeating aging suggests replacing body parts as they fail. Another aims at finding a master key to youth. Glutathione is a powerful antioxidant that protects cells and their mitochondria, which provide energy; some in Hollywood call it “the God molecule.” But taken in excess it can muffle a number of bodily repair mechanisms, leading to liver and kidney problems or even the rapid and potentially fatal sloughing of your skin. [and from another] Concept Drone Seats Two People and Hits Speeds of 120mph. March 27, 2017. http://www.dailymail.co.uk/sciencetech/article-4352540/UFO-drone-seats-two-passengers-reaches-120mph-190kph.html This strange vehicle might look like a flying saucer, but it's not for extraterrestrials. [and from another] Elon Musk is Setting up a Company that will link Brains and Computers. March 27, 2017. https://arstechnica.com/business/2017/03/elon-musk-is-setting-up-a-company-that-will-link-brains-and-computers/ The ultimate goal would be a “neural lace” to enhance people’s cognitive abilities. He imagines that Neuralink's proof-of-concept products will be implanted electrodes for treating epilepsy and depression. They will be much like current implants for treating Parkinson's, which work by regulating electrical activity in the brain. Their work will build on over a decade's worth of successful brain-computer interfaces (BCI), beginning with BrainGate, an early BCI tech that allows people to type messages on a computer by picking out letters one by one on a screen. It works by connecting to the brain's motor cortex: when the person thinks about moving, that thought is translated into movements of a cursor. But this method is still quite slow, and Musk's company hopes to speed things along. [and from another] Sci-fi plan to Hang a Wandering Skyscraper from Asteroid Orbiting Earth. March 27, 2017. http://www.dailymail.co.uk/sciencetech/article-4354612/Architect-unveils-skyscraper-hangs-asteroid.html Deemed the ‘world’s tallest building ever’, Analemma Tower will be suspended from an orbiting asteroid 31,068 miles (50,000 km) above the Earth– and the only way to leave is by parachute. The orbital path would swing the tower in a figure eight pattern between the northern and southern hemispheres each day, taking residents on a tour through different parts of the world - all in just a 24 hour orbital cycle. [and from another] Doctor Ready to Perform First Human Head Transplant. April 26, 2016. http://www.newsweek.com/2016/05/06/first-human-head-transplant-452240.html Italian neurosurgeon Sergio Canavero is set to perform a two-part human head transplant procedure he dubs HEAVEN (“head anastomosis venture”) and Gemini (the subsequent spinal cord fusion).

The elite seem to be lost in fantasy land lately, with serious discussion and enterprises funded to allow mankind to live forever, become immortal. It is obvious that aging and death is part of God’s plan, in fact genetically programmed to happen, so why the wishful thinking? The theft of wealth from the common man has allowed the 1% to get exorbitantly wealthy, and faced with the prospect of the Nibiru passage many are  becoming unhinged. Fearing judgement day, they wish to put off death. Being on the top of the pile at present, they fear the next incarnation will not be so advantageous.

Where mankind is not yet able to reconnect a severed spinal cord, suddenly there is discussion and plans to transplant an entire head to another body. This in concert with Elon Musk’s Neuralink plans to connect one brain with another, or perhaps with a computer, paints a picture of the elite wanting to escape the restrictions of their current human body. If not cheating death, then cheating nature. This is but a step beyond the constant body enhancements that humans endulge in, and none of this will succeed, but as we noted when Musk was collecting funds to colonize Mars  – this is not about succeeding, this is about making Musk rich.

So many billionaires and multi-millionaires around the world are in the know about Nibiru, aware of the pending passage, and are beyond nervous about this. They are also aware that the alien presence is real, control of gravity, the ability to heal many diseases and illnesses, and faster than light travel across the galaxy. There is alien envy involved, so designers – architects and engineers – are busy collecting funds from this envious crowd to suggest UFO shaped drones for travel and high-rise buildings hung in the clouds. Meanwhile, like children playing with toys, these elite neglect their spiritual development.

Prong 1 lasted barely two months, and Prong 2 wrapped up almost as quickly. We know that Prong 3 was stalled temporarily due to the US elections, but now that they've passed we've barely heard a peep. And in fact have heard more from those trying to drown out the prongs than the cast themselves. The Zetas have stated there will never be a perfect time to do it (peace in the middle east, no unrest), so to just do it. Can the Zetas shed any light on the situation without compromising the teams efforts?

When Obama failed to announce the presence of Nibiru by the Fall of 2015, we stated that the Council of Worlds would arrange for the common man to learn of the nearby presence of Nibiru and the approaching time of the passage by one means or another. The multi-prong’d approach ensued during 2016, but after arriving at Prong 3, with all the pieces in place for a “discovery” of Nibiru, it stalled. Even with Trump in the White House and the Clinton criminal cabal under arrest, even with ISIS under siege, the moment when the establishment feels they are ready for the riots that will surely come if Nibiru is admitted never arrives.

Without an admission at some point from the US, an announcement would not be believed. The cover-up was due to Reagan’s Executive Orders, and this must be admitted and retracted. Meanwhile Trump’s approval ratings plummet, lies about Russia continue in the media, and things keep getting worse. This is unlikely to change. Since all the astronomers involved in the Prongs are under constraints, how then will the announcement proceed? The best way to describe this is to say that a threshold will be reached, at which point there will be an essential announcement. We will be specific.

Over half the world is already learning the truth from their alien contacts. They know the establishment has been lying to them. Add to this the increasing visibility of Nibiru and its tail components. Bright orbs here and there around the Sun, red dust and smog, EMP, debris raining down, the wobble producing sunrise and sunset where the Sun is out of place, and the earthquakes and high tides that just keep getting worse. At some point, demands for the truth, crowds forming holding up placards, work stoppage, and marches verging on riots break out.

Any country that’s thinking of martial law will likely institute martial law. Because now has come the time when it can no longer be denied, basically because people can see it, the visibility will increase to that degree. Then what? Then people will begin to leave their jobs, leave their homes and mortgages, go to safe places. It is an essential announcement only because it has become undeniable. The martial law advocates are saying they must inform people in order to get them into safe camps and not just have rioting. Direct the energy, in other words.

At the same time, establishment characters such as the Trump administration will push Nancy forth for much more coverage in the media. They want this because they want to break the cover-up over the alien presence at the same time they break the cover-up over Nibiru. How else to explain the astonishing accuracy of ZetaTalk except to say that aliens are here and empowering mankind with knowledge. Their feeling is that if benign aliens can have more contact with people, there will be more open assistance to people.