On the Pole Shift ning http://poleshift.ning.com/profiles/blogs/picture-of-dark-object a dark object has been captured on a photo, with the following information regarding the capture: "Full Moon is in the center , house light lower right and dark object upper left side. Taken March 28 5:12 am EST in North Carolina. Was not visible to the eye, only the one picture. Camera (cannon) saw object just yesterday, during a review of the pictures taken previously." The dark object is not visible in the photo, which shows no signs of being doctored, until the photo is brightened.

Under color inversion, the dark object emerges. It shows a shadow similar but not exactly like the shadow on the Moon. The object's shadow is directly on the left, while the Moon's shadow has a center pointing to the upper left. Thus, it is not a reflection of the Moon. Lens reflections, in any case, are equivalent in size to the bright objects, or smaller than the object. Thus, this is not a ghost, a reflection, nor is it an orb caused by light reflecting off a particle of dust or a raindrop, as orbs appear as light objects, not literally black.

Skymap shows that the partially Full Moon on March 28, 2010, at 5:12 am from North Carolina is low on the horizon and at about Azimuth 270°. So the delivery man was looking west, though the Earth was not such that he was on the side of the Earth from which the Dark Twin is approaching. Nevertheless, he was looking out along the Ecliptic, in that general direction. I would think the Dark Twin would be blocked by the Earth itself, as this is just a couple hours before dawn, not midnight, and the curve of the shared orbit would likely put the Dark Twin more along the curve of the shared orbit, wrapping toward the Sun, not out there in the dark space. But, it could be somewhat out of our orbit, the shared orbit, due to trying to evade the Earth, the crowding. The Skymap diagram also shows that the dark object is closer to the Ecliptic than the Moon, as depicted in the photo.

Per NASA, the Moon is 1/60 the volumn of Earth, but only 1/4 the diameter. Per the Zetas, the Dark Twin is approximately the same size as the Earth. Taking a measure of the diameter of the Moon in this photo and comparing to the diameter of the presumed Dark Twin, we find it is as large as 8 Moon diameters. Since the Moon is 1/4 the diameter of the Earth, this size is not possible unless the dark object is a Monster Dark Twin, akin to the Monster Planet X persona seen and photographed repeatedly. Light rays bend out, then return to the Earth, thus seeming to represent a larger object. Monsters are almost invariably pale. At right is a Monster Sun persona of Planet X from Texas on August 6, 2003. Not a ghost or lens flare as it stands behind the telephone wires. 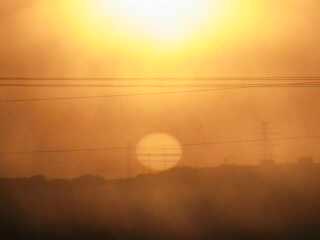 This is the Dark Twin, which has been crowding up behind the Earth in their shared orbit, but the orbit they share is no longer exact, due to the crowding. The Dark Twin has pushed back, slightly away from the Sun, to avoid crowding the Earth, in the same manner that the Earth has pushed back in her orbit to avoid the approaching Planet X. Such crowding will increase as Planet X comes outbound from the Sun, closing the gap between itself and Earth. Dramas will ensue, which we decline to detail at the present time. Why is the Dark Twin now visible when up until now has been seemingly impossible to see, having moved close up behind the Earth is their shared orbit? While the Dark Twin has been to the side of the Earth, such that light would not reflect from the Sun to the Earth as the sunlight would be returning directly to the Sun, it now has pushed back outside their shared orbit, so the opportunities for reflected sunlight to reach the Earth have increased. As a black hunk of rock, without atmosphere or water, it absorbs almost all light. This captured image does not reflect the true size of the Dark Twin, but is akin to the Monster Sun captures of Planet X, so often astonishing those who viewed them during the day, and proving when captured on film to be anything but a lens flare. Light reflected from the Dark Twin fanned out, but when captured by the gravity field of Earth bend back, presenting to the camera a large pale orb not representative of the actual size of the Dark Twin.

The Dark Twin, per the Zetas, shares the Earth's orbit but is normally hidden behind the Sun. It became visible when the Earth was halted in her orbit in December, 2003. It was captured in a photo on January 20, 2004 in China. At the time, this odd bluish/yellowish orb was not recognized for what it was.

Then in April, 2004, it was visible naked eye from Earth, many people noting a bluish/yellowish orb on the horizon, several times larger than Venus. In May, 2004 it was again captured in a photo from Arizona.