Last week on the newsletter we discussed Planet X being captured on one of the LASCO C2 satellite images, on the right hand side of the Sun and with its target="_top">tail wafting to the left. If the tail were wafting left, this would place it in front of the LASCO cameras. And this is exactly what emerged on New Year's Day! On that day, someone noticed a large orb in the lower left quadrant of a satellite camera that floats 21º ahead of the Earth in her orbit - called the Stereo Ahead satellite. Mercury was crossing the line of view of this satellite, crossing behind the Sun and moving right to left in the view. The position of the large blob was the correct position for Mercury as seen from this satellite camera.

But unlike the normal appearance of a passing planet, that appearance being a bright spot on the film, Mercury changed in appearance, became dull rather than bright, increased in size, and appeared to be rotating in a dust cloud wrapped around it. This generated a great deal of discussion on the GodlikeProduction message board. The object indeed had tracked across and just below the Sun as Mercury was expected to do from view from the Stereo Ahead satellite. But the change in appearance left many unconvinced that it was indeed Mercury. The discussion ranged from ascribing the dull, large object to be asteroid 1685Torror (which was not yet in front of the cameras), or Jupiter (which had passed from view days earlier, moved off to the right hand, and should also be bright in any case), some sort of new planet ejected from the Sun, or a large mothership. Someone claiming to have had a discussion with JPL even claimed this huge blob to be a star, though stars are bright pin-points on the LASCO images. But in that this object had tracked as expected for Mercury, appearing on the right hand side on December 22 and leaving on the left hand side on December 31, Mercury seemed to be the logical candidate. But why so dark and diffuse? And why the increase in size?

The orb presumed to be Mercury does not have the traditional aspect of passing planets. It appears too large and loses its light halfway through the transit. What kind of dust cloud could be obscuring the view of Mercury and diffusing the light so it looks too large? What kind of dust is swirling in front of the light from Mercury so that it appears to be rotating in place? The asteroid 1685Torro was thrown out as the explanation but likewise is not in the field of view per official orbit diagrams. Nor did the attempt from a NASA stooge to claim it as a star gain any advocates. What was discovered were many moon-like objects, reflecting light from the right hand side of the Sun. What is that light source? Clearly it is the object that was reflected on a December 23 LASCO image, an object with a tail drifting to the left, showing that the tail debris would logically be drifting left to be in front of the SOHO cameras.

What was discovered were many moon-like objects, reflecting light from the right hand side of the Sun. What is that light source? Clearly it is the object that was reflected on a December 23 LASCO image, an object with a tail drifting to the left, showing that the tail debris would logically be drifting left to be in front of the SOHO cameras. Their presence, so very much in the direction of Earth, presages another phenomena that will soon be evident to all on Earth. About this we will say little, in keeping with our desire to have the establishment discombobulated so the cover-up splits wide open like a rotten melon, spewing the truth about so broadly that it cannot be quickly dismissed.

Where is this leading? We have hinted that the drama is not yet over. We have hinted that earthquakes will be involved, and things seen in the skies. We are not allowed by the rules to be precise in our predictions, so cannot warn mankind of coming dangers. Regarding anything that would tend to prove the existence of Planet X and cause the cover-up to split open, we likewise do not want to clue the establishment into what that might be, as we want them to stumble. We want the participants in the cover-up to be frightened and blurt out the truth or fail to maintain the cover-up so that holes in the story line are obvious. Beyond this, it is leading to more severe Earth changes, which we have been predicting since the start of ZetaTalk. Diasasters will become so common they will no longer hit the news, and may not even be locally reported. Emergency management teams will be exhausted, and may not even notice a change in leadership in the White House during this time - Pelosi or Gore in the Oval Office at long last. These disasters, increasing at what seems an exponential rate, will morph into the last weeks we have so carefully detailed. And then the pole shift!

During the discussion on Mercury's odd appearance in the Stereo Ahead images, many small moon-like objects were discovered. These had a different appearance from the stars which sometimes appear in these images. These moons were large and illuminated on one side only. If Planet X is to the right of the Sun, then one would assume that the moons of Planet X being captured in these images would be illuminated on the right hand side, with light from a source to the right hand side and closer to the Earth than to the Sun. And this proved to be the case. These moons showed up in more than one Stereo Ahead image type, in more than one light wave length. The moons in the tail of Planet X are not next to the Sun, but are between the Stereo Ahead camera and the Sun. 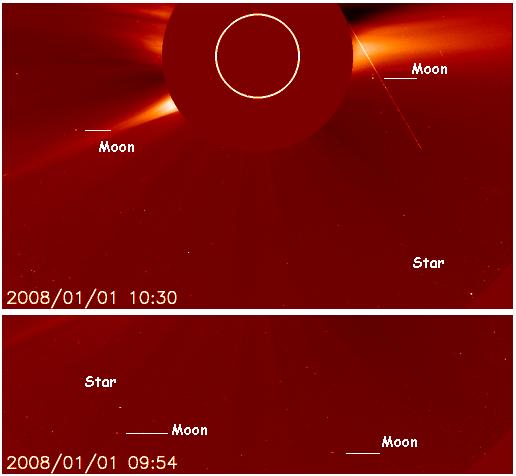 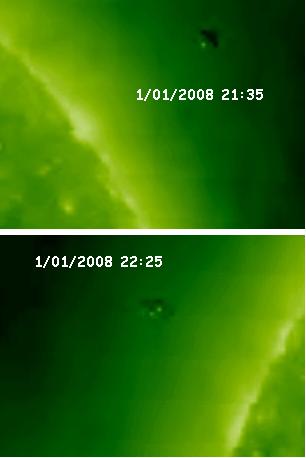